He said in the summer "If I was manager of Manchester United I'd win the league every season."

Sadly, he's at the wrong United.

Sam Allardyce: "We have five defenders who are missing at the moment and one that should have been playing, this morning pulled out, so our back four today (Razvan Rat, James Collins, Roger Johnson and Matt Taylor) has never played together at all this season.

"When you get continuous disruption in your back four you then don't get your solid unit, and sometimes that solid unit that you would like is difficult to keep when players are not used to playing with each other, and Newcastle's players exposed that particular weakness and scored two goals. 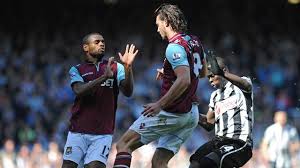 "It's very disappointing, when you've won at Cardiff, to not get anything here, and certainly from our point of view it was more about our defensive lapses rather than the quality of Newcastle's play to score both goals, I felt.

"We could have done better.

"We know how many points we need in those 16 games to get safe in the Premier League and we've got to keep fighting on and I think there comes a time when the players have to realise it doesn't become about performances any more - it becomes about results more than anything. Whichever way you can get them, you've got to get them."