Newcastle were able to gain a vital away point as they draw 1-1 away at Molineux against a frustrated Wolves side.

It didn't take long for the goals to start flying in as Newcastle took the lead through a well-crafted Miguel Almiron goal, who finished wonderfully to continue his impressive run of form. However, poor marking at a corner allowed Leander Dendoncker to sweep home tying the game up after just 14 minutes. ​ ​Wolves almost took the lead soon after half time but Matt Doherty's attempt was superbly blocked on the line by Matty Longstaff. The quality of the game was nowhere near as good in the second half as Wolves had the most possession, but struggled to create chances.

The game began to peter out as Newcastle were able to frustrate Wolves, with neither team able to create any sort of clear cut chance. Steve Bruce will be the much happier of the two managers as his side were able to resist the home side's pressure in the final few minutes.

Here's 90min's review of the game.

Wolves came into this game looking for a reaction after losing back-to-back ​Premier League games at the start of the year. Today's result means it's now three on the bounce without victory, which perhaps indicates that teams have worked how to nullify the threat that Wolves pose down the flanks and on the counter attack.

Watford and Newcastle are two sides that Nuno Espirito Santo will feel his side should have beaten, so perhaps there will be some reflection from the Wanderers boss over the size of his squad, given their Europa League commitments.

João Moutinho is a very, very classy footballer and he dictated the game for much of the 90 minutes.

He provided the assist for the equaliser and he was Wolves stand out player throughout spreading the ball wonderfully from a deep midfield position. Pundits often point out Ruben Neves as Wolves' most important player - but Moutinho showed that he is pivotal to the way Nuno's team play.

Newcastle were also struggling for any sort of form coming into the game, having lost three in a row in the league.

Steve Bruce will take a lot of heart from this battling performance but will be hugely concerned with the injuries that his team picked up. Dummett, Gayle and Joelinton all came off with some sort of injury and this could be a huge blow to Newcastle's season, unless signings are made.

His side performed admirably despite the disruption, and were stoic in defence - despite a late onslaught from the home side.

Miguel Almiron is rapidly developing into the player that ​Newcastle fans hoped that he would be after signing from Atlanta United. 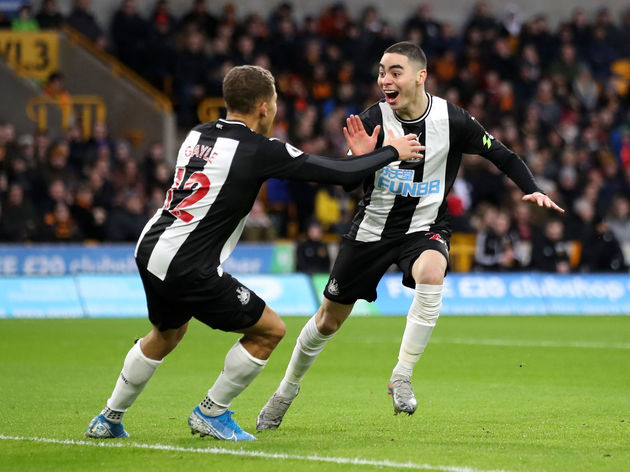 He opened the scoring with a fabulous finish into the corner, tucking home after a well-worked, intricate move.

The Paraguayan looks full of confidence now, after going over 20 games without any kind of goal involvement - and will hope that his goals can continue contributing points to the Magpies' Premier League tally.

Wolves travel to the south coast next weekend to play Southampton, where they'll be hoping to pick up their first win of the year.

Meanwhile, Newcastle host Frank Lampard's Chelsea in the Premier League, after playing Rochdale in an FA Cup third round replay.​