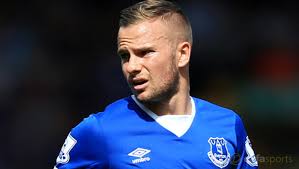 According to the Daily Mail, Newcastle United have made their first move for Tom Cleverley by asking Everton about a January deal for the midfielder.

The Magpies have seen Isaac Hayden thrive in holding midfield since arriving from Arsenal over the summer, but Jonjo Shelvey's recent suspension has left Rafael Benitez without a proven playmaker.

Jack Colback hasn't impressed so far this season, and reports suggest that Newcastle are looking to bring in a new central midfielder during this month's transfer window – especially given that Cheick Tiote is out of contract at the end of the season.

The Daily Mail report that, whilst Newcastle have an interest in midfielders Fabian Delph and Ruben Loftus-Cheek of Manchester City and Chelsea respectively, they've now made a move for Everton midfielder Tom Cleverley.

It's stated that Newcastle have asked about taking Cleverley on loan, given that he's slipping down the pecking order at Goodison Park, with young midfielder Tom Davies brought on against Hull City and seemingly working his way into the first team ahead of Cleverley.

The 27-year-old former Manchester United midfielder has started just five games in all competitions this season, and with The Telegraph reporting that Everton are looking to sign current United ace Morgan Schneiderlin, Cleverley may have little future on Merseyside.

It's added that West Bromwich Albion are also keen on Cleverley, but Newcastle have made the first move – and Benitez may be hoping to beat off Premier League competition for Cleverley's signature.