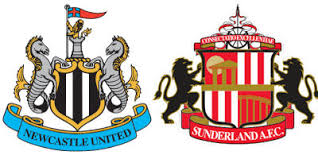 At St James’s Park last night, Magpies youngster Jonathyn Quinn did a job on the Sunderland that nemesis 'Who Ate All The Pies' Micky Quinn never achieved.

He hit a hat-trick that ended the Black Cats’ hopes in the FA Youth Cup.

Three poacher’s efforts from the Ashington-born frontman secured a comprehensive victory for Newcastle in the Under-18 derby, before strike partner Adam Armstrong put the icing on Sunderland’s humiliation to send the hosts into the fifth round.

While Sunderland had gone toe-to-toe in a scrappy opening 45 minutes, without ever hurting Newcastle, the final scoreline was as comprehensive as it suggested.

On the stroke of half-time, Newcastle got their noses in front when Rolando Aarons jinked down the left and drove a low powerful low cross into the area which was coolly helped into the far corner by Quinn.

Magpies striker Armstrong should have done better in the 54th minute when he met Quinn’s inch-perfect cross from the right, but he couldn’t make a clean contact and sent his glancing header across the face.

But moments later, Newcastle did double their advantage when Macauley Gillesphey’s cross from the right was spilled horribly by Stryjek and Quinn poked it home from cross range.

Quinn’s hat-trick arrived in the 73rd minute - and it was almost a carbon-copy of his first - as he met a low cross from the right, this time from Jamie Sterry, and curled it into the far corner.

It got even worse for Sunderland in the 82nd minute when Sunderland substitute Andrew Nelson sent a suicidal back-pass towards his own goal which went straight to the feet of Armstrong.

The striker had just Stryjek to beat and kept his cool to tuck it away low to the keeper’s left.

Armstrong almost grabbed a second in stoppage time when he span away from Ross Colquhoun and bore down on Stryjek, only for the keeper to block well with his outstretched right leg.

It was irrelevant though. Sunderland’s misery had been sealed long before the final kick.