Toon Didn't Save Mackems - They Saved Themselves! 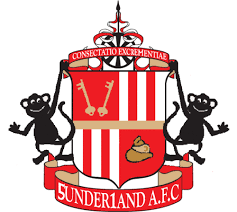 Manchester City assumed pole position in the title race with a 3-2 win but Everton gave the conspiracy theories short shrift after Manuel Pellegrini's side endured a testing time at Goodison Park.

Anything other than a City victory would have handed the initiative back to Liverpool but three points put them top of the table on goal difference with Chelsea to play Sunday and the Reds a day later.

Everton, despite many fans claiming they would be happy to lose in order to help stop their near-neighbours' title bid, needed a win themselves to stay in the hunt for the Champions League but defeat handed fourth spot to Arsenal 24 hours before they play.

Having proved they would not be rolled over by taking the lead through a Ross Barkley wonder-strike and fighting back through Romelu Lukaku's header, Everton were ultimately left empty-handed as Edin Dzeko's brace and Sergio Aguero's 17th Premier League goal earned City the spoils and the advantage in the title fight.

If they win their remaining two matches at home to Aston Villa and West Ham, City cannot be caught irrespective of what their rivals do in their final two fixtures.

Cardiff and Fulham were both relegated from the Barclays Premier League after Sunderland continued their remarkable resurgence with a shock 1-0 win at Manchester United.

The Black Cats' unlikely victory means they are now out of reach of both Fulham, who lost 4-1 at Stoke, and Cardiff, who are bottom of the table after a 3-0 defeat at Newcastle.

The honeymoon period may already be over for United interim boss Ryan Giggs who enjoyed a dream start to life in the dugout with a 4-0 win over Norwich last weekend.

But if the Welshman was hoping to build a case for a longer stay in charge at Old Trafford, Sunderland did him no favours, registering their third victory in as many matches thanks to Seb Larsson's cool first-half finish.

Ten points from four games against Manchester City, Chelsea, Cardiff and now United mean Gus Poyet's men can only be caught by Norwich, who are three points back with Chelsea and Arsenal to play.

Giggs threw on Robin van Persie and Danny Welbeck in search of an equaliser in the second half but United suffered from the same lack of fluency that has cost the Red Devils all season.

The defeat leaves United seventh in the table, 20 points behind league leaders Liverpool while Sunderland know one more win will almost certainly be enough to survive.

Survival was always going to be an uphill task for Fulham who have been sitting in the league's bottom three since January 28.

Felix Magath's side knew only a victory would keep their hopes of safety alive but Peter Odemwingie, Marko Anautovic and Oussama Assaidi put Stoke three ahead in the second period.

Kieran Richardson pulled one back for the Cottagers with 10 minutes to play but Jon Walters sealed the win and Fulham's relegation to the Championship.

Cardiff's stay in the top flight is also over as Newcastle recorded their first win in seven matches thanks to goals from Shola Ameobi, Loic Remy and Steven Taylor.

The Magpies had lost their previous six matches in a row and a number of the club's home fans walked out after 69 minutes to protest against the running of the club.

Aston Villa all but secured their Premier League status for another season as they beat Hull 3-1 at Villa Park.

The win means Paul Lambert's side are now six points clear of the relegation zone with a significantly better goal difference than 18th-placed Norwich.

The hosts were ahead within a minute as Ashley Westwood converted Gabriel Agbonlahor's cross but Hull levelled when Jordan Bowery scored an own-goal.

An Andreas Weimann double however put Villa back in front and sealed a vital three points for the home side.

Rickie Lambert strengthened his case for a place in England's World Cup squad as he scored in injury time to give Southampton a 1-0 win at Swansea.

Lambert's 12th league goal of the season means the Saints are now guaranteed to finish the campaign eighth in the table.

West Ham ended any lingering relegation concerns in the early game, beating Tottenham 2-0 thanks to a Harry Kane own goal and Stewart Downing free-kick.

Spurs played most of the match with 10 men after Younes Kaboul was shown a straight red card for bringing down Downing when through on goal.