Gervinho, Yaya Toure and Ya Konan Didier all got on the scoresheet to ensure last year's finalists made it to the competition's last eight. 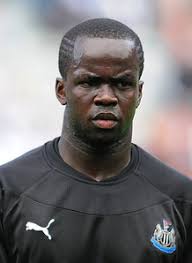 Both sides began in scrappy fashion, threading sloppy passes in the midfield as neither were able to maintain possession.

Ben Youssef and Youssef Msakni were manning the Tunisians' attack, but were always relieved of the ball by excellent tackles from Newcastle United midfielder Cheick Tiote and Didier Zokora.

The Ivorians, short of the services of their talismanic captain Didier Drogba, gained a foothold after 15 minutes, with Salomon Kalou missing two clear cut chances after his close-range header failed to find the target and a powerful drive from 20 yards was blocked by Tunisia goalkeeper Ben Cherifia.

By the 21st minute, the Ivorians were still on top of proceedings and opened the scoring through a corner kick, when Gervinho snatched a loose ball from a Tunisian defender to the left of the box before playing a one-two with Lacina Traore and side-footing the ball into the back of the net.

The Ivorians continued to pour forward in a bid to double their lead, with dangerous efforts from Emmanuel Eboue and Yaya Toure impressively repelled by Cherifia.

Tunisia defender Chammam Khalil manoeuvred a ball with a hand inside their box following a pressing from Toure and Traore, but protests for a penalty from the Ivorian bench were ignored by the Mauritian referee Rajindraparsad Seechurn.

Traore had the first opportunity after the break from a free kick executed by PSG's Siaka Tiene, but the towering striker headed down to the side of the post.

Tunisia coach Sami Trabelsi brought on Oussama Darragi and Hamdi Harbaoui at the hour mark as they hustled and harried for an equaliser. Khlifa was served to the right flank of the Ivorian area, but after outrunning his marker and charging into the box, he hit a powerful effort that whistled just wide.

Traore was brought off for Drogba in the 68th minute, and after fluffing multiple chances upfront, the former Chelsea star retreated to assist their increasingly feeble defence as the Tunisians made threatening attempts in front of the Ivorian goal.

Msakni was awfully tripped to the right of the median line by Tiote, who was lucky not to bag a second yellow card.

Yaya Toure doubled their lead after linking with a cross from Tiene and unleashing a long-range effort that finished its course inside the Tunisian net, with eight minutes remaining.

And substitute Ya Konan Didier scored the third goal after collecting an assist from Gervinho.