'The Two People Who Can Save NUFC Are Talking Right Now!'

Kevin Keegan has admitted he wouldn’t change a thing when it comes to Newcastle United’s near miss in the Premier League title race in 1996.

The Messiah wooed a big crowd of Toon fans at Hedworth Hall in South Shields this week.

Keegan stayed at the Chichester venue until midnight to sign autographs and pose for pictures and his presence raised the roof.

United fans are coming up to the 18-year anniversary since they watched their side squander a 12-point lead at the top of the Prem table to lose the title to Manchester United.

But Keegan told a packed house if he had his time again, he would not alter his attacking philosophy, he said: “I get asked a lot. What can you do?

“People say we should have played more defensively once we got 12 points clear.

“I always say imagine playing that well to get 12 points clear then I go in the dressing room and play a couple more defenders and say I’m not going to play David Ginola or Rob Lee.

“Why would I want to do that?

“Then if we lost it people would have said it’s because we weren’t playing the way we were.”

Fans will never forget the night when Keegan’s team outplayed the Red Devils before Eric Cantona snatched the winning goal against the run of play.

That handed Man United a 1-0 win and, for many, was the turning in the title race.

Keegan said: “We battered Man United and probably played better than we did in the 5-0 win (the next season).”

Keegan also spoke of how Sir John Hall had turned to him to lead Newcastle out of the doldrums in the old Second Division.

United had come perilously close to being relegated to the Third Division, with last-gasp wins over Portsmouth and Leicester City in 1992 dragging the club out of danger.

“After living in Marbella for six and a half years I came back and I’d been back two days and my phone rang,” Keegan explained.

“My wife said: ‘There’s a guy called John Hall on the phone wants to speak to you from Newcastle’. 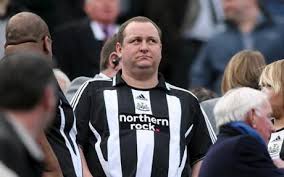 The rest, as they say, is history, but Keegan – who also entertained fans with a powerpoint presentation of his life and football career – showed one image of how Newcastle were when he took the job in 1992.

The photograph, taken at the club’s old training HQ in Benwell, displayed a young Lee Clark, his then captain Kevin Scott, Liam O’Brien and Matty Appleby with a young team then second bottom in the old Second Division.

He revealed he needed support and quickly turned to his former Liverpool and Newcastle team-mate Terry McDermott.

Keegan said: “People talk about the Entertainers but they don’t realise the players we had at the start.

“What do you do when you have been playing golf in Marbella for nearly seven years?

“I didn’t know the league or anybody.

“Newcastle were second bottom of the league and we were into February.

“I wondered who I could get to come and help me.

“I thought: ‘You’ve got to be mad to come here’. So I rang Terry and he was up to Newcastle that night!”

Keegan’s first five years at Newcastle resulted in taking the team from the relegation zone in Division Two to the brink of the Premier League title four years later.