The Laughter And The Tears From The Coaches

Southampton manager Mauricio Pellegrino said: "The first goal in the first minute had a massive impact on my players. From this moment we could not react, the spirit of the team was really poor. Without spirit, without character, we can play badly and we can have a difficult day.

"We have to show the spirit and that's the biggest problem today. I have not seen one game this season like this at all.

"When you do not play a good game, you have to show you are on the pitch, even running, even fighting, even playing football, and do the best we can. The worst thing was the attitude.

"We are in this position for a good reason, but we still have eight games and we are still alive. We have to say sorry to the fans. We did not represent the club with the values that the club has got." 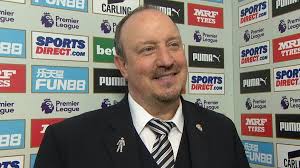 Newcastle manager Rafael Benitez said: "We knew it was a massive game for us, against a team close to us in the table. We needed to do well. The players approached it well, the intensity they showed, they way they moved the ball, it was very pleasing.

"You need a bit of luck score early. We scored a second and needed the third just to kill the game. You could see the hard work they put in for the clean sheet. When you see the players working so hard, as a manager you have to be pleased.

"We know Southampton have most of possession in their games, and after the goal they had to take the risk and attack. So we can be organised. When you play against a team who have possession and pass a lot, you have to defend well and counter attack.

"Five points [above the relegation zone] is good but there is still plenty to do. I have confidence in the team that we can do it."

Newcastle have a three-week gap before their next fixture as they are not in action again until 31 March, when they entertain Huddersfield Town.