If you’ve ever played Sunday League football, then you’ll understand the importance of squad numbers. They represent the football food chain, you can’t score 25 goals a season while wearing the number five shirt, it’s physically impossible.

Well actually it isn’t impossible, but you’ll look a lot better doing it while sporting number nine. Numbers are the natural order of the beautiful game, some players were born to wear the magical eight, while others want to watch the world burn with 99.

Some epic names have entertained St. James’ Park with numbers 1-11 on their backs.

So, forget about Sunderland 'Til I Die and tune into the Toon, as 90min take a look at the best players to have ever worn each shirt number (1-11) at ​Newcastle United. ​Shay Given flourished at he Magpies during his 12 years on Tyneside.

In his debut season he showed his class to help ​Newcastle reach the 1998 FA Cup final, and he go on to make a total of 462 appearances for the club and keep 125 clean sheets at the club.

When he left for ​Manchester City in 2009, he was only 34 games away from breaking Newcastle’s all-time appearance record held by Jimmy Lawrence. 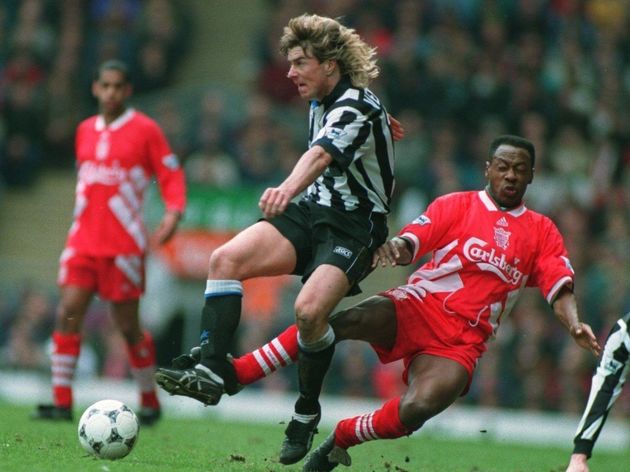 The number two jersey was a hard decision, it was so close to being handed to Fabricio Coloccini, as the Argentinian had a solid career for the Magpies, but it was his messy exit from the club that seen him come up short.

Instead it has to be Barry Venison. The defender was vital to Newcastle in their 1993/94 campaign, as they returned to the top-flight. The Englishman was a mean left-back that was known for his tenacity and he showed this during his three year spell at the club.

He made 109 league appearances for Newcastle, with his only goal coming against ​Aston Villa at St. James’ Park. José Enrique was a very solid player for Newcastle, he was brought in from Villarreal in 2007 and was an instant hit with the Toon Army. During the 2009/10 season he was often their saving grace at the back, as he helped his team secure promotion back to the Premier League.

Enrique racked up a total of 129 appearances for the club, and in 2010 he was voted by fans as the club's player of the season. This one was like picking your favourite child. On one hand you’ve got players like Kevin Nolan, Yohan Cabaye, and Nicky Butt and yet, you can’t look past Nolberto Solano.

That magical right foot of his has provided countless ‘OMG’ moments, every goal this guy used to score was a certified screamer. But it wasn’t just his goals that made him stand out, his crossing of the ball was sublime and this helped Newcastle score many a goal. As stated earlier ‘you can’t score 25 goals a season while wearing the number five shirt’ and former Newcastle defender Andy O’Brien certainly didn't do that. During his 120 league games for Newcastle he managed to bag himself just six goals.

O’Brien was a central figure for the Newcastle defence in the early 2000s however. He played with no fear and never turned down the opportunity to get stuck in, which was probably why he broke his nose three times during his stay at the club. Starting his Newcastle journey in 1989 he was part of a youth influx that included Robbie Elliott, Steve Watson, and Lee Clark. Howey spent 11 years with the Magpies and was integral to their promotion winning side in 1993.

From that moment he was one of the first names on the team sheet and he continued to be a key player in the Newcastle defence. Howey was a Premier League runner-up in both the 1995/96 and 1996/97 seasons. ​The number seven shirt is a statement maker, if you have this number then you’re probably a very level-headed footballer and focus entirely on your game – so sorry Joey Barton, unfortunately you don’t make the list.

Instead it has to go to Newcastle legend Rob Lee. The midfielder spent a decade at the club and is considered to be one of the best players to have ever worn the shirt. Lee was made Newcastle captain in 1997, and, overall, he made 303 league appearances for the club and scored 44 times during his ten year stay. It had to be ​Peter Beardsley, didn't it?

Dubbed ‘Pedro’ for his flair on the ball, during his two spells at the club he made 321 appearances and scored 117 goals. One of the most talented players in the club's history. ​Well it wasn’t going to be Joelinton.

It was always going to be Alan Shearer - the local hero who became the club’s highest ever scorer with 206 goals. Shearer is the greatest striker to ever grace the Premier League, and it would have been an injustice if he didn’t make the list.

‘Captain Fantastic’ is the physical embodiment of ​Newcastle, his career for the club will be spoken about for generations.

What a player, what a striker, and what a number nine. The career of Craig Bellamy was a rather controversial one to say the least, but his talent was undeniable. Bellamy was at Newcastle from 2001 to 2005 and he quickly struck up a productive strike partnership with Shearer.

Bellamy made 93 league appearances for Newcastle during his four year stay and netted 28 times.

Bellamy was still a player of importance for the club, and if it wasn’t for injury, he could’ve done a lot more during his time at St. James’ Park. ​His commitment to the cause could never be questioned and he was the beating heart of any midfield he stepped into.

For ​Newcastle, Gary Speed was a kingpin in the midfield, often an influential player in games, his incisive passing was key to Newcastle going forward.

The Welshman made 213 league appearances for the club and scored 29 goals, he was extremely well liked within the footballing community and the whole world of football mourned his sad death in 2011.