Still No Offer For The Club And Rafa Growing Frustrated

Newcastle United’s poor run of form has resulted in some mixed responses from the club’s fan-base after the 4-1 defeat at Old Trafford made it three defeats in a row and one win in seven games. 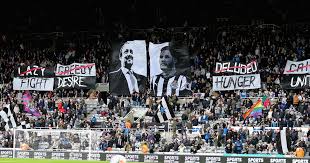 Toon fans always knew this season was going to be hard and Rafa Benitez warned his board several times in the summer his squad lacked experience and quality.

But the club decided to plough on with the job - despite Mike Ashley admitting he can’t compete with top sides in the Premier League.

So if United can’t bring in top players, does that mean the club are simply treading water and plans to be ambitious have been shelved for a later date?

Only the current board, who operate beneath a veil of silence most of the time, can answer that.

Here we look further into some of the arguments that Saturday night’s loss threw up as Newcastle were well beaten by the Red Devils.

Surely we can’t be too harsh because Newcastle are a newly-promoted club?

The Magpies are a newly-promoted side as a consequence of bad decisions in the 2015/16 season.

After a near brush with relegation in 2015, also caused by refusing to spend big, Newcastle did splash out by their standards under then boss Steve McClaren.

They paid £14.5million for Gini Wijnaldum, coughed up £13million for Aleksandar Mitrovic and £8.5million for Chancel Mbemba to name a few of the big buys that summer.

The issue was - something that wasn’t new at the time (ask Alan Pardew) - that Graham Carr was effectively choosing the squad and McClaren had no say in who came in.

By the time he finally got into the ear of the club’s managing director Lee Charnley and persuaded them to sign Jonjo Shelvey and Andros Townsend the club were nose-diving to the Championship.

The reason Newcastle were relegated in the end was because of the political instability at St James’ Park and, while McClaren’s results weren’t good enough, his big mistake was believing he could persuade United to do it his way.

The fact Newcastle missed out on the first round of the big TV deal was completely avoidable with better decision making.

Should Rafa Benitez take some of the blame?

In short, no - and the vast majority of fans aren’t going down that road.

If anything United should be grateful that Benitez is happy to try to do the job with such limited resources!

When Newcastle handed Benitez a three-year contract in 2016 they did do in the knowledge that the Spaniard would be fully in charge of football operations.

After relegation, the main aim was to make an instant return to the Premier League and he achieved that.

This season the first aim is to achieve survival, but Benitez made it clear that the current squad would need quality additions and some experience to pull that off.

These requests were ignored over the summer and Benitez was told that the club didn’t have the funds to compete.

Therefore, it left Benitez with a limited budget and he spent it accordingly, bringing in the likes of Joselu at £5million, Javier Manquillo at £4.5million and spent £10million on Jacob Murphy – regarded good value for a player with potential.

But Newcastle did not put forward funds for bigger earners meaning they missed out on a host of players with more experience.

Benitez can now only try to get the best out of a young squad that still has plenty of Championship players in it.

The fact he’s guided Newcastle to 11th so far is a respectable achievement.

Don’t the club have a chance in January to stave off any threat of relegation again in the winter transfer window?

They have an opportunity to do exactly that if they choose to do so.

Ask anybody close to the squad and they’ll tell you that Benitez is only expected to have a limited transfer kitty in the next window.

That means he might only have enough to bring in one quality addition plus possible loan deals.

Having been told there was no fortune to spend last summer and enduring a barren January window earlier this year, the board are yet to offer Benitez a proper shopping spree.

Unless there is a takeover in time for the window opening, Benitez may have to continue building Newcastle with bargain buys.

What has happened to the TV jackpot coming United’s way?

Winning promotion to the Premier League is worth £170million to the Magpies.

But they spent just £36million last summer and under the current regime, they will spend less in January.

Benitez has been told the big bucks won’t be available to spend until the summer.

He said recently: “After some months this team will be stronger because they continue to work very hard.

“Then we will stay in the Premier League, we’ll get money from the TV and we can compete against teams we couldn’t this year because of wages and transfers.

“You can talk about players at Bournemouth or Burnley that we couldn’t sign because we couldn’t afford the fee or their wages.”

Seldom do Newcastle’s current board members speak in public, but Ashley has admitted the funds he has handed Benitez are “not enough”.

In the past Newcastle have generated funds by loans and by bringing sponsorship money forward.

They will be guaranteed TV money next year and the Premier League have stated in the past the cash is there for the sole purpose of buying players.

Richard Scudamore stated in 2015 the aim was to have the “The best product, the best players” and Newcastle are expected - like all clubs - to help make the Premier League the “best competition in the world”.

Is a takeover the only route to happiness for Newcastle in the long-term?

Under the current operational model, Benitez is certain to either get tired of making ends meet or get offered another job where he is fully appreciated.

On Saturday night he was asked by national journalists if he’d like to be able to compete with Jose Mourinho on a level playing field again some day and he responded he would.

Mike Ashley has made it clear he can only take Newcastle so far but the club’s future now boils down to how much he is prepared to sell for.

Talk of a £300million price tag has been played down but there is still to be a formal offer.

With Newcastle sitting in a good position in the Premier League this could be a good time to sell for Ashley as sliding down the division would see the club’s valuation slashed significantly.