​Steve Bruce has confessed that he hasn't fully utilised the talents of Miguel Almiron this season, admitting that he hasn't been playing the midfielder in his best position.

The Paraguayan has been largely played on the right wing this season, but has often failed to live up to his hype following his move to Tyneside in 2019, only scoring twice and registering one assist in 27 Premier League games so far this campaign.

Speaking to ​Newcastle's website after the game, Bruce admitted that his tweak in system enabled Almiron to play in his best position.

"I think Almiron’s best position is off the front and he did ok as well," the 59-year-old said following a 0-0 draw that left the Magpies in 14th place, just five points above the relegation zone.

Almiron has only shown glimpses of his creativity since arriving from ​MLS in January 2019, but has perhaps been stifled by his position on the right-hand side, while his form could significantly improve if Bruce persists in playing him through the middle. 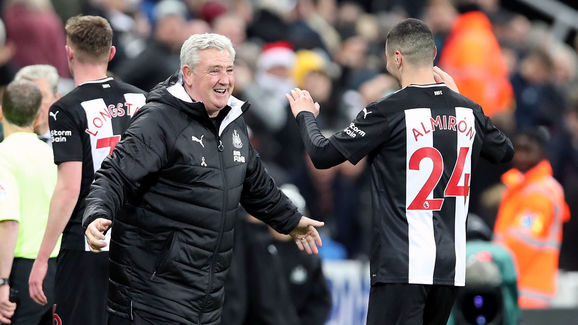 ​Newcastle have struggled to score throughout the season, and now sit bottom of the goalscoring charts in the ​Premier League this season with just 24 goals in 28 matches.

The Magpies' strikers have scored just one goal between the four of them - provided by Joelinton in the third game of the season - and Almiron has struggled to find the back of the net or even turn provider for the majority of the campaign.

Bruce's side have won none of their last five league matches and may just start to look over their shoulders at the chasing pack, with the Magpies edging closer towards the bottom three.