Carlo Ancelotti believes that Zinedine Zidane’s success as Real Madrid manager is down to to the relationship he has built with the players, something the Bayern Munich coach feels Rafa Benitez wasn’t able to do. 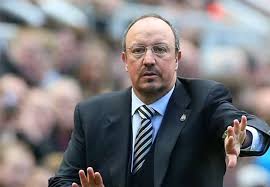 Zidane worked as Ancelotti’s assistant at Madrid and was appointed the club’s new head coach last January after Benitez was sacked less than seven months after replacing the Italian.

Despite having never worked as a first team manager before Zidane won the Champions League last season and his side are top of La Liga having been unbeaten for 40 matches in all competitions prior to this past weekend’s loss to Sevilla.

Ancelotti has been impressed with what he has seen from his former assistant and believes the Frenchman’s rapport with his team has been crucial to success.

The coach told ESPN: “Not everybody can manage Real Madrid. The key to success I think is the relationship with the players. The knowledge of football is secondary, as is the experience.

“I mean, sure, Zidane had not managed in the top-flight, but he played for a long time, he had worked as an assistant, he had managed Castilla, he knows the game, he knows the tactical aspects, he knows the club.

“The key question I think was the relationship with the players, as I said, and the ability to work with them on the training pitch. I mean structuring a training session in such a way that you get your message across and the players are happy and receptive.

And Ancelotti added that it was this relationship building that set Zidane apart from Benitez, and while the Spaniard was more experienced than the Frenchman it was Zidane who had “the edge” due to his history at the club.

He added: “Look, a guy like Rafa Benitez probably has more experience and more knowledge of the game but maybe he wasn’t able, in the short time he was there, to build the kind of relationships that are necessary.

“And Zidane, in that respect, had an edge, because he’d been at the club, he’d coached many of the players, heck, he’d even played with some of them.

The Bayern boss added that Zidane isn’t much of a talker but this worked for the 44-year-old as, when he did speak, it instantly commanded respect and silence from his players.

“You don’t need to give an inspirational monologue every time. Sometimes you don’t even need to talk much.

“Zidane doesn’t talk much, though I’m sure it’s still a lot more than he talked before, but the thing is, when he does speak, people listen. He commands respect. And he builds on that.”