He approaches a key game in his reign at St James' Park, because Ashley told him at the start of the season "tenth ... or else!"

And THAT is why Saturday is so important to him, and just another game to everyone else. 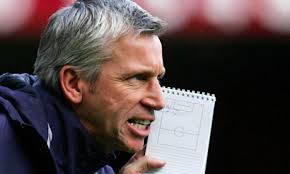 The 52-year-old will send his side into Barclays Premier League battle against relegation-threatened Cardiff on Tyneside on Saturday under intense pressure from supporters.

Fans once again called for his head during and after Monday night's tame 3-0 surrender at Arsenal, their sixth successive league defeat.

Owner Mike Ashley will deliver his verdict when the pair meet at the end of the season for their usual debrief, but Pardew's critics in the stands are growing in both number and volume and anything but a victory this weekend would simply add fuel to the fire.

The manager admitted: "It's a massive game for us.

Pardew has been in charge at St James' Park since December 2010, and we ask the question - are we better off NOW than we were THEN?

Three years and four months on from his arrival and we are going through the worst spell of results since 1977!