​Newcastle are prepared to allow Dwight Gayle to depart on loan, providing an agreement is reached to make the move permanent for £20m - according to a report.

The 29-year-old has been unable to force his way into Steve Bruce's plans on a regular basis, despite firing 23 goals last season in the Championship while on loan at West Brom. 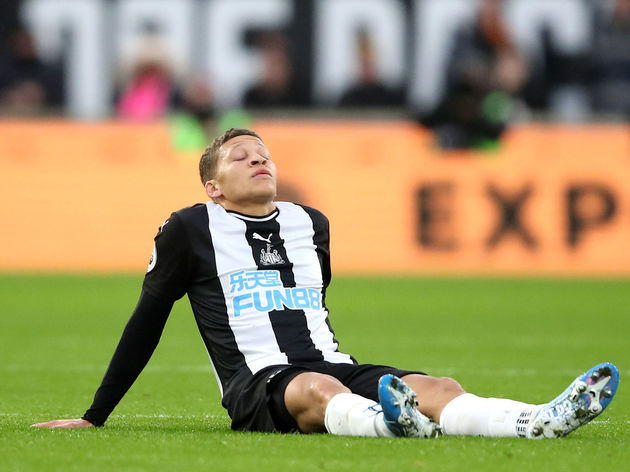 The former Crystal Palace striker was given the opportunity to show what he can do against Wolves at Molineux, but ended up departing the field with a hamstring injury - but not before ​MailOnlineSport claimed that Newcastle are willing to let him go once more.

The Magpies will reportedly acquiesce to Gayle's wishes to play more regular football, with Nottingham Forest among a number of interested parties - but only if an obligation to buy is included in the deal.

​Newcastle are said to value Gayle at around £20m, which may price him out of a move for most Championship clubs, even though transfer fees are continuing to rise thanks to increased television revenues.

Prior to his showing against Wolves, Gayle had made just eight appearances for Newcastle this season, failing to find the back of the net. He is behind Joelinton and Andy Carroll in the club's striking pecking order, even though both have struggled to make an impact this season.

So the fact that Gayle had to limp off against Nuno Espirito Santo's side will be desperately disappointing, as he'd finally earned himself a starting opportunity after weeks of watching on from the sidelines.

Forcing his way into a manager's first team plans is nothing new for Gayle, with his previous spell at ​Crystal Palace also seeing him drift in and out of the team.

He was a regular during Newcastle's maiden season back in the top flight, after firing them to promotion during the 2016/17 season with 23 goals, but failed to make the desired impact, scoring just six times in 35 games.

But his finishing ability is proven at Championship level - it's now a question of whether interested parties are willing to stump up the Magpies asking price.