Manchester United boss Jose Mourinho claimed after the 3-2 home victory over Newcastle that he was the subject of a "manhunt".

Ahead of Saturday's match, senior figures at United strongly denied a report from the previous evening that Mourinho would lose his job this weekend regardless of the outcome of the Premier League contest. 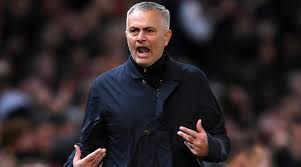 And after seeing the Red Devils end their four-game losing streak in all competitions having come back from 2-0 down to triumph, Mourinho told BT Sport 1: "In spite of the first time I see in football a manhunt, I am 55, I am mature, I can cope with it. I can live with it.

"Clearly some of the boys, in spite of their not being the man that is hunted, I think they are not coping well with it. They way they start the game was absolutely panicking.

"I think at half-time we had a good conversation. We didn't promise to each other we would win the match, we promised we would give absolutely everything without fear. They gave everything."

United went 2-0 down early on via goals from Kenedy in the seventh minute and Yoshinori Muto in the 10th.

Their subsequent fightback saw substitute Juan Mata net a 70th-minute free-kick, Anthony Martial equalise six minutes later and Alexis Sanchez, who had also come off the bench, then head home the winner in the 90th minute.

Mourinho added: "As a friend of mine was saying to me this morning, if tomorrow rains in London it's my fault. If there is some difficulty to have the agreement of Brexit, it's my fault. And I have to be ready for all of this.

"I think a lot of wickedness and a clear man-hunting that I think in football is too much. It's my life, it's a life I love, it's a life I worked since I was a kid. I will love it until my last day. It's one more experience in my life."

In his post-match press conference, Mourinho said to the assembled journalists "I'm sorry boys" as he sat down.

And he said when asked about his "manhunt" comments that "it doesn't stop" and that he felt nothing would stop it.

When Mourinho was asked about the fight his team had shown with their comeback, he said: "I think there is too much talk and you put in doubt the honesty and the professionalism of the players.

Mourinho also expressed his gratitude to the United fans at the ground, described them as "absolutely amazing", and added: "My happiness about the victory is not because of myself, is because of the fans and the players."

Having heard boos around the stadium at half-time, Mourinho then heard his name being sung loudly following Sanchez's goal.

One sign visible in the crowd said 'STILL UNITED WITH JOSE!!' and another said 'JOSE IS A WINNER! WOODWARD IS A LOSER!', while at one point a section of Red Devils supporters sang "Jose's right, the board are s****". Executive vice-chairman Ed Woodwarrd was watching on from the stands.