Mitro Gets The Nod

Aleksander Mitrovic will start against Birmingham. 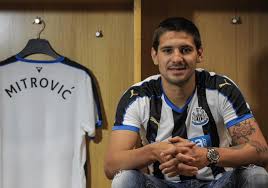 And it won’t be the last time the Serb pulls on a Toon shirt.

Mitrovic has been starved of first team starts due to the prolific form of rival Dwight Gayle this season.

His lack of opportunities has alerted clubs both at home and abroad with speculation that he was on his way out of St James’ Park reaching fever pitch when he was not even on the bench for the 1-0 defeat at Blackburn.

Benitez, however, insists he remains part of his plans.

“We are not interested in selling him,” he said.

Gayle, the Championship’s top scorer, will be rested but the Toon chief is confident Newcastle will still possess plenty of firepower.

“Mitro plays so don’t be worried about whether we will have enough goals,” he added.