A late Allan Saint-Maximin strike was enough to earn Newcastle a 1-0 win against 10-men Southampton, who had Moussa Djenepo sent off in the first half.

The win moves the Magpies one point ahead of their opponents, who themselves remain seven points clear of the relegation places.

Saints keeper Alex McCarthy was called into action early on, first blocking Dwight Gayles' effort and then making a fine double save from Miguel Almiron on the rebound. 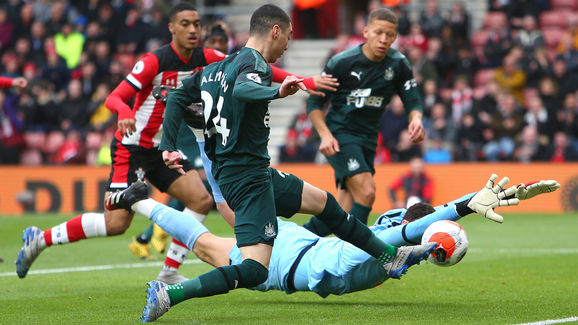 After this, Southampton began to dominate possession. Just before the half hour mark a good run from Yann Valery allowed the right-back a clear sight of goal, but he curled his effort straight at Martin Dubravka.

The hosts' chances were then dealt a hammer blow when Moussa Djenepo was dismissed for a reckless challenge on Isaac Hayden. The forward was initially shown a yellow, only for it to be upgraded to a dismissal after a VAR check - much to the disdain of the home crowd.

Making the most of their man advantage, a fantastic ball from Jonjo Shelvey found Dwight Gayle unmarked in the box, but his header was superbly kept out by McCarthy from point blank range. 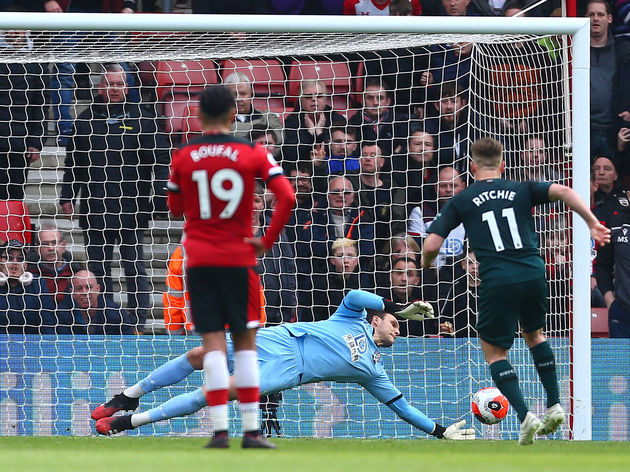 VAR again haunted the Saints before half time, spotting a handball from Sofiane Boufal to gift Newcastle a penalty. Matt Richie's spot kick - the first one Newcastle has taken in nearly a year - was kept out by the impressive McCarthy to keep the scores level going into half time.

Despite being a man down, Southampton created the first chance of the first half with Shane Long latching onto Pierre Emile Hojbjerg's through ball and dragging his shot wide.

The game became increasingly disjointed as Newcastle desperately searched for a goal. After a series of near misses for both sides, the Magpies would finally find the breakthrough ten minutes from time. Saint-Maximin stole the ball from Valery before slotting home past a crestfallen McCarthy. The Frenchman wheeled away and celebrated with his trademark backflip, knowing he had secured his team a much needed three points.