Ketsbaia is adamant that Newcastle deserve better than they had under the Alan Pardew period – and he says a return to the glory days CAN be achieved within the constraints of a head coach role.

Ketsbaia’s credentials are spells in Cyprus, where he shocked Europe by leading Anorthosis into the Champions League, and five years as head coach of Georgia, where he again upset the odds by beating Croatia in a very credible Euro 2012 qualifying campaign.

Temuri Ketsbaia (talking to the Sunday Sun): “I am watching what’s going on at Newcastle with a lot of interest and of course I am interested in the head coach role.

“There are not many managers in the world who would say no to that club. Any time that the job becomes available, it’s exciting and I am available to speak to Newcastle about it.

“I’d love to manage in England, I always said that and I think I could do a good job. 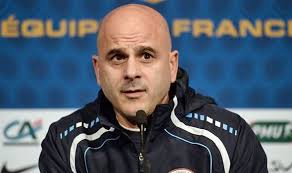 "I worked at a club for many years that won championships, I managed in the Champions League and I worked with the national team for five years, so I don’t think the level is a problem.

"It wouldn’t be a problem and I know all about Newcastle.

“Newcastle is a big, big club with fantastic supporters that should always want to do better.

“It is a club that is very close to my heart and I loved my time there.

“It deserves to do well. Whoever gets that job, it is a brilliant opportunity. I would think that there will be many managers who want it.

“I don’t think it’s a big problem. There are good players at Newcastle, so if that is the policy it is OK. As long as everyone at the club is working hard and trying to do well it is OK.

“One of the problems at Newcastle is that if they’re doing well, players get other opportunities and you can’t always keep your best players. So you have to work harder than you did before.

“That happened to me with other clubs. I am used to fighting against the odds and there is a way to do it. Newcastle have to fight to compete and that is what I think they could do.”