It's A Kind Of Magic 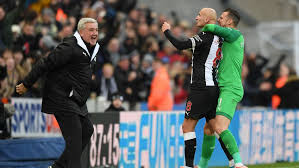 Newcastle's ability to surprise has been a feature this season.

On Monday they were woeful against Aston Villa, allowing Jack Grealish to run the show.

But against City they produced a disciplined defensive display while also making the most of the few attacking opportunities they had.

Almiron and Shelvey, whose performances on Monday prompted groans from the Newcastle section, played major parts in the fightback.

Almiron, without a goal or assist since joining earlier this year, again worked tirelessly across the pitch and provided a clever ball for Willems.

When Shelvey's late strike resulted in the loudest cheer of the match, the midfielder ran over to the dugout to milk the applause.

Newcastle manager Steve Bruce told BBC Sport: "It took them a wonder goal for all the possession they had. We produced a bit of magic ourselves too, but of course we had to defend and I think the players were magnificent in their work."

Manchester City manager Pep Guardiola told BBC Sport: "We played at a good level. It was not easy because they defended deep. We scored two goals but we also let two in which is disappointing.

"With substitutions sometimes players forget positions. We found a way to get through but unfortunately at the end we conceded a goal. There are teams that defend deeper like this, it happens all season.

"We do the same work we have done over the last few seasons. We tried to score more goals but it did not happen."