Info For Away Fans - Brighton

To Amex Stadium is located at Falmer on the outskirts of Brighton, very close to the University of Sussex.

At the end of the M23, continue onto the A23, heading towards Brighton. At the roundabout which is the junction with the A27, take the A27 towards Lewes. After around four miles you will see the stadium on your right hand side. Leave at the A27 and take the slip road sign posted Falmer (B2123). At the top of the slip road turn right crossing back over the A27 and the entrance to the stadium is down on the right.

There is no parking available for away fans at the stadium itself, but coaches and minibuses will be allowed to park there providing that they have been pre-booked with the Club. Please note that there is a large no parking zone in force around the area of the stadium on matchdays. Colin McDermott adds; 'We were directed by stewards to the Bridge Car Park (off the A27, opposite Stanmer Park) where vehicle access/egress is via a small tunnel under the railway line. From the car park, which seemed to be a part of the University/Community Centre complex, it is a ten minute stroll to the Amex. However, it was anything but a quick getaway after the game and we were charged an ‘eye-watering’ £15 to park there!' There is also the option of renting a private driveway near the Amex Stadium via YourParkingSpace.co.uk.

The Club are encouraging fans to use the Park & Ride services located at three different locations; Mill Road (BN1 8ZF), Brighton Racecourse (BN2 9XZ) and Mithras House at Brighton University (BN2 4AT). Probably the easiest for away fans to locate is Mill Road, as it is just off the A23/A27 junction. However, this is by far the busiest of the three, so if you have time on your hands consider using one of the other alternatives such as Brighton Racecourse or Mithras House both of which are quieter. The capacity of Mill Road is 500 cars. The road is located next to a BP garage, which (if coming down from London) you will see over on your right at the top of the slip road off the A23.

Mill Road isn't a car park as such, but a normal road that is closed for this purpose. Tony Hewitt informs me; 'The Park and Ride was well-organised both ways. Going in, you park parallel in the next slot and it is easy to drive in. Buses and cars leave the road at the other end so it is completely one-way and simple. The road is divided into zones (A-E). Coming back after the game, it was well run by the stewards with only a 10 minute wait for a bus. The bus stops at all the zones so you end up close enough to your car'.

An alternative may be to park at Lewes Railway Station Car Park (BN7 2UP) and then take the train from there to Falmer. The cost of the car park is £6.35 for the day and there are over 200 spaces. The train take just seven minutes to reach Falmer and the cost of the journey is free, as free public transport to and from the Amex Stadium on matchdays within the Hove area is included with your match ticket.

Some Sat-Navs are not recognising the stadium post code of BN1 9BL. You can try instead BN1 9SD which takes you to nearby Falmer Railway Station instead. 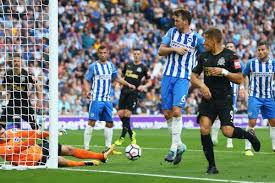 The nearest railway station is Falmer, which is situated right by the stadium. Kevin Bartholomew informs me; 'The quickest and easiest way to get to the stadium though is by train. Falmer station is adjacent to the ground. It's three stops from Brighton central station on the line to Lewes and Seaford. Alternatively, you can avoid Brighton completely by getting a train to Lewes and changing there for Falmer. There are four trains an hour in either direction'.

Brighton Central Railway Station is over four miles away from the stadium. So either get a train, taxi or bus up to the stadium. Brighton & Hove Bus No 25 can be caught from Cardinal Square stop G (Route and timetable on the Brighton & Hove Bus Company website, which shows bus stops) operates a regular service (every 12 minutes) up to the stadium from Central Brighton, as do Bus Numbers 28 & 29. Journey time is around 20 minutes. On return the No 25 leaves from the stadium via a stop through the coach park, near to the away fans entrance.

The Club have a scheme whereby travel to the stadium by public transport within a geographical zone is free as it is included within the price of your match ticket. Valid on both buses and trains, just simply show your match ticket or booking form (if collecting your tickets from the Stadium ticket office). The zone extends as far north as Haywards Heath station and east to Lewes. So fans travelling from London for instance only need a train ticket to Haywards Heath.

Rob Haynes a visiting Nottingham Forest Fan also found going by train frustrating; 'We stayed in Brighton so walked to the station and arrived at 13.30 to find a huge queue snaking around the concourse. Whilst it generally quite well organised it didn't add much to the pre-match experience to have to stand and wait for such a long period before getting on a packed train to the ground. Fans that left it later no doubt had an even longer wait. After the game we walked straight from the away end to the train station. At 6pm (the game finished before 5pm) I was finally moving and on my way into Brighton centre. All generally organised okay but again such a frustrating wait and such a waste of time! Trains again jammed back to Brighton. Thankfully no trouble but potential for trouble after needle game is multiplied by the time it takes to get in and out the ground. I feel sorry for any Brighton fans having to experience such long waits, especially in poor weather'. Alternatively you could consider parking/staying in the pleasant town of Lewes and getting a train from there to the stadium, as Alan Holmes a visiting Norwich City fan did; 'After the match I went straight to the railway station and joined the Lewes-bound queue. One train filled and left before I reached the platform, but I was still in Lewes by 5.30pm, leaving time for a quick drink in the pub across the bridge before catching the train to London Victoria.'

There is not much in the immediate vicinity around the stadium. There is one pub called the Swan Inn located on Middle Street in Falmer, which is about 15 minute walk away, but for most fixtures this is for home fans only. Alcohol is served within the ground in the form of Harveys real ale (£4.30), Fosters (£4.20), White or Red Wine (£4.20). Harveys have also produced a special 'Albion' bottles beer which is only available at the stadium or from the Harveys shop in Lewes. 5p from every bottle sold will be donated to the Macmillan Cancer Support charity.

Outside Brighton Mainline Station there are a number of excellent pubs'. Phil Kramer recommends the Evening Star, on Surrey Street. It is away fan friendly and only two a minute walk away from the station. It is in the CAMRA good beer guide and serves real Sussex ale and cider'.

If arriving at the Mill Road Park & Ride then a little further on down London Road (A23) on the left is the Black Lion pub which is a Harvester outlet.

Owen Wilkinson informs me; 'After the game the bars at the ground remain open. The North Stand stays open to 8pm on a Saturday. So if you want to avoid the queues at the railway station then stay at the ground for a beer and watch the late kick off game on the television screens. They also display the departing train times on screen too, so you know when to leave'.

John Ellis a visiting Leicester City fan tells me; 'We were directed to the Downs Hotel in Woodingdean, on the Falmer Road (B2123) at the Warren Road junction. The Hotel has a bar and is about two miles away. They offer free parking at the hotel and they do a shuttle run (two minibuses) every 15 minutes between 1.30pm and 2.30pm, the cost is £4 return for adults and £2 for children. We used this with no problems at all and returned after the game by Hotel minibus at 5.15pm. Also just off the A23 around a ten minute drive from the stadium is the Plough Inn on London Road, Pyecombe, (BN45 7FN). I noted that there was street parking available close by, which was popular with Brighton fans who then caught a bus to the stadium. The pub is signposted off the A23.'

Keith Matthews a visiting West Ham United fan adds; 'We walked up to The Swan from the ground which was a good 15 minute walk from the stadium. However they had security on the door and you had to show home section match tickets to gain access. We were also denied access from the Hikers Rest in Coldean (home supporters only again and had to show match tickets). We entered the ground and must admit service at the bars within the stadium was very good.'

Away fans are housed in the South East corner of the stadium. This area not only includes the corner section but also part of the East & South Stands lower tiers. Around 3,300 fans can be accommodated in this area. It is worth noting that the Club charge away fans more for sitting in the East Stand rather than the South Stand or South East corner. As you would expect from a new stadium, the view of the playing action and leg room are both good. Plus the added bonus of padded seats is a rare 'luxury'. Food available inside the stadium include handmade Pies from Piglets Pantry in Shoreham-on-sea, which are baked on-site. You can choose from Steak & Harveys Ale with mushrooms, Chicken & Ham with leek and Vegetarian butternut squash with spicy tomato. However, it will cost you £4.20 for the privilege making them the most expensive pies in the league. Also on offer are Cheeseburgers (£4.70), Burgers (£4.60) and Hot Dogs (£4.20). Peter Llewellyn adds; 'The Amex Stadium is an excellent venue, very nicely set in the countryside. The concourse is extraordinarily wide and spacious for such a small stadium. Comfy cushioned seats, excellent view, plenty of leg room, great pitch and the best acoustics of any stadium I've been to. The home fans singing was deafening, all down to the acoustic effect of the stadium design.'