Hughton To Return To The Championship?

A lot has been said about Chris Hughton since his dismissal from Brighton some 48 hours ago. 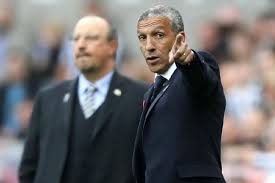 Brighton fans generally seemed to feel it was the right time to say thank you and goodbye.

Chris Hughton did a brilliant job at Newcastle United and WAS badly done to by Mike Ashley.

However, Brighton only managed 36 points, two more than Cardiff, and the Seagulls only picked up 15 points in their final 23 Premier League games. Indeed, they only won two of the final 18 matches, three of the last 23.

‘West Bromwich Albion will hold talks with Chris Hughton next week as they bid to persuade him to make a swift return to management.

Hughton was sacked by Brighton on Monday but will meet with West Brom officials, following the club’s defeat to Aston Villa in the Championship play-off semi-final.

Albion will also consider an approach for Patrick Vieira, the former Arsenal midfielder and current Nice head coach, while Slavisa Jokanovic, the former Fulham manager, could come back into contention after he was interviewed in March.

But Hughton’s previous record of two promotions makes him an attractive option for the West Brom board.

Hughton, 60, guided Newcastle and Brighton out of the Championship and it is understood he is keen to continue working in management after his dismissal earlier this week.’