On 19 January 2019, Newcastle hosted ​Cardiff City at St James' Park. It had been a turbulent season up to that point, with rumours swirling of their talismanic manager Rafa Benitez being considered for jobs across the globe.

There was an 'anywhere but here' mentality. The Magpies were in the relegation zone. Pre-match, the air of negativity was palpable. Stability, fan enjoyment and positivity around the club seemed distant concepts.

Fast forward 12 months. Newcastle have more wins than ​Arsenal and as many win as ​Spurs. Fourth-placed ​​Chelsea are the most recent club to fall foul of Steve Bruce's team. Bruce has reignited his love affair with the Premier League and found his home town club to be the perfect dance partner. Despite their relatively comfortable survival last term, there was an extremely toxic atmosphere on Tyneside at the start of the season. Fan favourite Rafa Benitez had left for China - stating that the club 'did not share his vision' - fuelling the perennial grumblings of discontent against Mike Ashley and his financial dealings at the club.

The sense of disappointment that Bruce received upon his announcement cannot be overstated. There were protests against the club during their season-opening loss to Arsenal and during their lowest point of the season at ​Norwich - a 3-1 defeat.

All things considered, it's been a truly remarkable season for Newcastle as they've continued with the clear tactical identity that Benitez left, but with Bruce at the helm. He has created a clear sense of team spirit that might have been previously lacking. During Newcastle's last-ditch win against Chelsea, the Benitez blueprint was there for all to see. The team had only 28% possession during the 90 minutes. It was a compact tactical showing, illustrating how a collective unit can outmatch a team with superior individual players. It's clear to see that the team is following on from the Spaniard's work over the previous three years.

Benitez was a man famously obsessed with video analysis and tactical approaches to games. So obsessed was Rafa with the functionality of players within a team that Steven Gerrard mused on this fixation saying, 'I am not sure he is that interested in players as people'.

Compare that with Bruce's Newcastle. During their 4-1 thumping of Rochdale in the third round replay of the FA Cup, Joelinton, who hadn't scored in 20 (!) matches, ran straight to Bruce to hug and thank him for his faith. 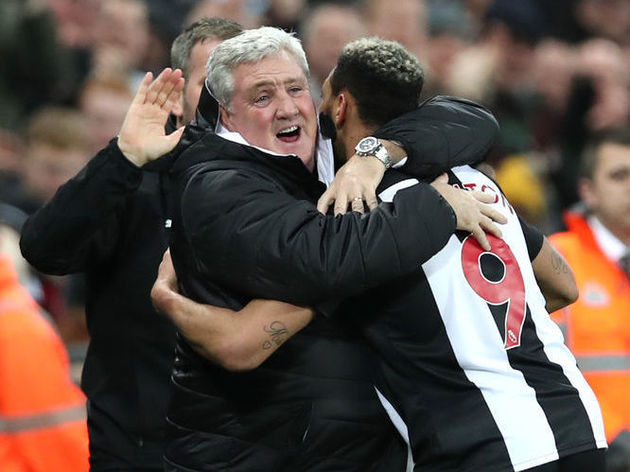 Beating Chelsea has not been the only standout result for Newcastle this season. Victories against Tottenham, Manchester United and Sheffield United are nothing to be sneered at, added to the extremely respectable draw against Manchester City.

We could have a deep dive on each individual player, but it's their Gucci headband-wearing Frenchman that catches the eye. The electric Allan Saint-Maximin has been outstanding to watch. He's a fan favourite who either looks like he could score a goal of the season contender or be used in a reboot of Danny Dyer's Football Foul-Ups. Always loving the limelight, Allan was the creator of Isaac Hayden's 93rd-minute winner on Saturday. However, it is their collective shape that is winning them matches. They've scored the second lowest total (22) in the Premier League. Interestingly, a total shared by ​Crystal Palace, who are ahead of them in ninth. Palace are also run by an old school manager who has a similar tactical approach to the one being deployed at St James' Park.

What Bruce has done this season, at a club that seems perennially in turmoil, is outstanding. ​Sheffield United have been fantastic, ​Liverpool have been otherworldly, but Newcastle is a club whose expectations outweigh their reality.

Bruce joined to a deafening silence, but now they sing his name. He might not win it, but Bruce certainly deserves to be in the running for