Good And Bad 24 Hours For Suarez 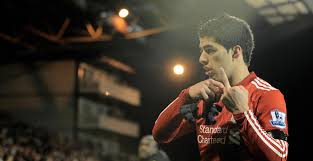 The Uruguay international, 27, topped the poll of 300-plus journalists with a victory over Anfield team-mate Steven Gerrard, the England captain.

The Liverpool forward will be honoured with the prestigious FWA accolade, which has been running since 1948, at a gala dinner at the Lancaster London Hotel on May 15.

Suarez was last week also named Player of the Year by the Professional Footballers' Association.

In a poll that saw 10 different players collect votes, Suarez collected 52 per cent of the overall vote, ahead of his club captain, Gerrard, with Manchester City midfielder Yaya Toure in third place.