Everton Currently 'Talk Of The Toon'

Tyneside stages a match with two teams heading in opposite directions - indeed they have passed one another like ships in the night recently in the Premier League standings. 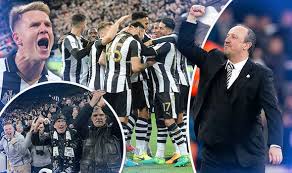 Everton are obviously talk of the town after holding neighbours Liverpool to a draw at Anfield on Sunday and this represents another big showdown for Sam Allardyce as he takes his new team to one of his former haunts.

He did not last a year at St James’ Park and I don’t doubt for a moment he will have been scheming furiously to get one over Toon with all the hype over the Merseyside derby finished for the time being.

His side obviously put a lot of effort and more importantly, emotion, into the latter fixture so it will be down to Allardyce to pick them up once again in a bid to keep his unbeaten start at Goodison Park going.

Big Sam’s opposite number Rafa Benitez can’t catch a break currently and his side have managed to gain just one point from their last seven games after they were sunk by an unfortunate last-gasp own goal against Leicester.

There are goals in the team with Dwight Gayle looking sharp on a regular basis having set up one and scored another against the Foxes but getting caught at the back remains a serious issue until calming influence and club captain Jamaal Lascelles gets back to take a grip of the situation.