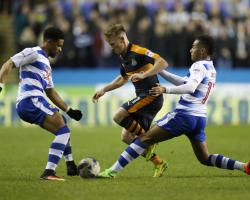 Magpies frontman Daryl Murphy saw a header cleared off the line before Royals winger Garath McCleary almost snatched a dramatic stoppage-time winner, his effort hitting the top of the crossbar.

Brighton had lost their past two games, but returned to form at the New York Stadium.

Anthony Knockaert gave the Seagulls the lead four minutes into the second half, with substitute Solly March making sure of the points 11 minutes from time as Rotherham were pushed closer to League One

Third-place Huddersfield kept up their promotion hopes after a 1-0 home win over Aston Villa, the only goal of the game coming from defender Tommy Smith after 69 minutes

Leeds saw midfielder Kalvin Phillips sent off late on at Fulham, where Tom Cairney's stoppage-time goal secured a 1-1 draw for the Cottagers

An own goal from Tim Ream, slicing the ball past keeper David Button, gave Leeds an early lead, but Cairney had the final say against the 10 men to leave both teams still in the play-off shake-up

Sheffield Wednesday remain sixth after a 1-1 draw with Burton

Ross Wallace put the Owls ahead with a long-range effort in the 16th minute, but Jackson Irvine's fine volley after 24 minutes proved enough for a share of the points

At the other end of the table, Wigan won 1-0 at Birmingham with a first-half goal from defender Dan Burn and Bristol City fought back to claim a 1-1 draw against Norwich.

Blackburn also boosted their hopes of beating the drop after Derrick Williams' last-minute equaliser against Cardiff salvaged his side a 1-1 draw at Ewood Park, Kenneth Zohore having earlier given the visitors the lead with his seventh goal in eight games

Wolves, meanwhile, ended a run of five straight Championship defeats with a goalless draw at Ipswich

Vibe's brace and a Jota strike put Brentford 3-0 up and although Forest pulled goals back through substitutes Ben Brereton and Zach Clough in the final eight minutes, the hosts could not find an equaliser

QPR beat Barnsley 2-1 at Loftus Road, Idrissa Sylla and an own goal from Angus MacDonald putting Ian Holloway's men in charge before Tom Bradshaw pulled a goal back

A stoppage-time goal from Tom Barkhuizen gave Preston a 1-1 draw at Derby, who had taken a 50th-minute lead through Matej Vydra