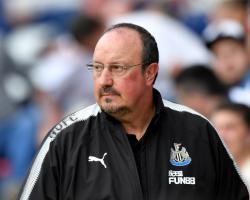 Fitness coach Francisco de Miguel Moreno said on Friday that Benitez still hoped to be able to be present at the Liberty Stadium, but a statement from the club confirmed he would be absent.

"The team will be led by Rafa's coaching staff, who will be in contact with the manager throughout matchday," the statement read.

"Everyone at the club wishes Rafa a speedy recovery

The 57-year-old Spaniard had the procedure on Monday to address an infection resulting from an earlier hernia operation, and as of Friday had tried three times to make the journey from his home in the north-west for Tyneside, only to be forced to turn back in pain

De Miguel said on Friday: ''It will be Rafa's decision, but also he is taking into consideration our feelings, I think in this case even more because he hasn't seen the players training and Rafa normally has this feeling for the momentum of everybody

''Because he doesn't have this feeling before his eyes, he will in this case be more comfortable saying, 'Okay, what do you think?' And we will decide together.''