Barton Has A Point - Ban Them From Breeding!

Barton has hammered Channel 4 show Benefits Street and suggested the show is actually a set up.

The Channel 4 show has sparked controversy after focusing on the inhabitants of James Turner Street in Birmingham where 90 per cent of the residents claim benefits of between £500-£900 per month. 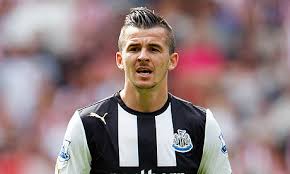 Commenting on the latest episode of the show, the former Newcastle United skipper tweeted that there was "strong evidence to support the breeding licence theory".

He wrote: "1st viewing of this Benefits Street. What am I seeing! Is this a wind up?"

Barton: "National service for your benefit money. Clean the street. Pick rubbish up. Loads of stuff needs doing. No work. No MONEY!" —

"A licence to give financial advice. So on and so forth. Yet, anyone can have child? Nothing else needed except the sexual appetite.

"The world is f***** sometimes" and he slammed one of the street's residents as a "full blown tramp".

Barton was equally harsh towards the Romanians who had come to Britain in the hope of a better life and improved working conditions.

The former Manchester City and Newcastle star wrote: "No way is this real. This is a setup. #benefitstreet #setupstreet

"To annoy people like me. Romanians. If you don't like it here. You know to do. Imagine me going to Romania trying this shit on?

"Interesting they all have cars, gold chains, mobile phones, a roof over their heads and are fat. Can't be that bad now can it.

"Off to bed. Never again. Ground control to Major Tom. This place is f****. Can I come home new please. Pretty please. xx.

"Still not accepting that is reality. Convinced it is a setup to make people detest the benefits system. Either way it works."