Ba - Newcastle Is Not An Option!

To be honest, a return to Newcastle was never on the cards as the former Toon striker told the media he would only join a club in the Champions League.

Ba's future with Chelsea has been the subject of speculation after the Senegal international started only six games in all competitions this season.

He was a target for Arsenal last summer, but important goals against Paris St Germain, Swansea and Liverpool in the latter stages of the season appear to have secured Ba's future at Chelsea. 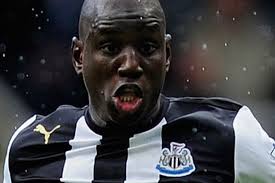 Demba Ba: "Jose Mourinho has asked me to stay at Chelsea next season.

"He assured me that my situation wouldn't change.

"I see this as my reward from God. I weighed up the pros and cons, and think that I will stay put to see what happens.

"I don't know whether my situation will improve, but what with the coach's offer anything can happen.

"I want to play a lot of matches and I think that will be the case for me.

"I was approached by Arsenal last August. But Mourinho refused to let me join them, as he said he didn't want to help a rival team to get stronger."