Linda Ashley, 50, who is back with the Newcastle United owner after a 14-year break, hopes to sell the plush villa to a buyer from the Middle East.

The villa is in a secluded 4.5 acre plot is Andratx, on the southwest tip of the island, and was designed by top architect Alberto Rubio.

The cafes and restaurants in the exclusive Port Andratx are only a few minutes away from the seven-bedroom home that can only be seen from the sea.

Work has started on a second house for potential buyers who require staff quarters, the Sun on Sunday reported.

The old fishing town is popular with celebrities. Brad Pitt and Angelina Jolie bought a luxury villa earlier this year for £2.65million, adding to their extensive property portfolio.

Mr Ashley, who admitted to MPs that he had employed staff on zero hours contracts, attended Linda's 50th birthday party at the villa in June.
In the same month, she accompanied him to Westminster where he was grilled by MPs over the 'Gulag' conditions suffered by his staff.

Managers imposed a ruthless 'six strikes and you're out policy' with staff penalised for taking a short break to drink water and for taking time off work when ill.

Staff were also docked 15 minutes pay if they were one minute late for work.

In a devastating report, MPs said the billionaire must be held 'directly accountable' for 'appalling' working conditions which are more akin to a 'Victorian workhouse than that of a modern, reputable High Street retailer'. 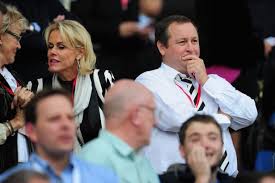 Mr Ashley has since pledged to scrap rules punishing staff for going to the toilet or being just a minute late - and will also phase out zero hours contracts.

The controversial Newcastle United owner was said to have been heartbroken after the 2002 split with his wife of 14 years.

The break-up cost him a reported £50million, making it one of the most expensive divorces in British history.

After their divorce interior designer Mrs Ashley, who is mother of the billionaire's three children, went on to have a relationship with businessman Simon Brodin, an ex-boyfriend of S Club 7 pop star Rachel Stevens, and had a son, Tyler, now 12, by him.

But in 2014 Mrs and Mrs Ashley were seen stepping into his Bentley after a series of central London dates, including a key dinner in a local curry house and they have since rekindled their relationship.

Mr Ashley started Sports Direct 34 years ago with a £10,000 loan from his parents.

He built it up from a single shop in Maidenhead, Berkshire, into one of the nation's most successful retailers and holds a 55 per cent stake in the company, currently valued at around £1.4 billion.

He opened his first Sports Direct store in Spain three years ago and after making more than £1.5million in sales in the first year, launched another in Madrid last November.