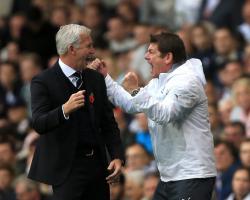 Swans heap more misery on MagpiesJohn Carver's problems took a turn for the worse as Swansea condemned Newcastle to an unwanted club record seventh successive Barclays Premier League defeat.The Magpies, who started the day just seven points clear of the relegation zone, went into first-half stoppage time leading through Ayoze Perez's 20th-minute strike, but surrendered their advantage before they returned to the dressing room when striker Nelson Oliveira took advantage of weak defending to head home, and capitulated within five minutes of the restart as Gylfi Sigurdsson gave the visitors the lead.Jack Cork put the Swans further ahead 19 minutes from time and, although Siem de Jong marked his return from an eight-month injury nightmare with an 88th-minute goal, he could not prevent his side from slipping to a 3-2 loss.There were protests by home fans among a crowd of 46,884 - the official attendance was lower than last Sunday's against Tottenham when supporters were urged to stay away - both before and during the game, with owner Mike Ashley the target of pre-arranged action in the 34th minute, drawing attention to the B#34million the club banked during the last financial year.Swansea headed back to South Wales having cemented their place in the top half of the table, but the Magpies face an anxious few weeks after losing a seventh league game on the trot for the first time since 1977 and failing to ease their fears of being dragged into a survival fight.Head coach Carver admitted after last weekend's 3-1 home defeat by Spurs that he would set out to win ugly against the Swans, and, for 47 minutes, he would have been reasonably happy.With Emmanuel Riviere having been handed a rare start in support of Perez, who has spent much of his first season in English football playing as a lone and isolated striker, the home team were initially far more progressive than they have been in recent weeks.Remy Cabella saw plenty of possession in midfield with Jack Colback and Jonas Gutierrez - re-called to the starting line-up after resolving his differences with Carver - prompting, and full-backs Daryl Janmaat and Vurnon Anita were prominent too.It was Anita who provided the 13th-minute cross from which Perez headed wide at the far post, although that was the signal for the visitors to increase their tempo, and they might have taken the lead twice within seconds.First central defender Ashley Williams headed wastefully wide from a Sigurdsson corner, and then midfielder Jefferson Montero could not climb high enough to direct Angel Rangel's cross at goal.But when the opening goal arrived on the half-hour, it did so at the other end.Cabella turned the ball into the path of Riviere, who out-paced midfielder Cork before crossing with the outside of his right foot

Defender Jordi Amat got the the ball first, but could only serve it up perfectly for Perez to fire into the empty net for his first goal since December 28.Federico Fernandez might have levelled with four minutes, but headed straight at goalkeeper Tim Krul from another Sigurdsson corner, and both Rangel and Sigurdsson tested the Dutchman from distance.But he was finally beaten in stoppage time, and in predictable fashion as loan signing Oliveira was allowed to run onto a Sigurdsson corner and send a downward header into the turf and up into the roof of the net.Newcastle resumed in positive fashion with Ryan Taylor curling a 48th-minute free-kick just wide, but they fell behind just two minutes later when Montero picked out Sigurdsson's run into the box with a perfect pass and he finished off via the foot of the post.Swansea were brimming with confidence and Krul had to sprint from his line to hack away Sigurdsson's 56th-minute through-ball marginally before Oliveira got to it, and Mike Williamson only just managed to hold off the striker after he broke through on the hour.The home side's response was distinctly tepid, and their day was done 19 minutes from time when Oliveira's deflected cross arrived at Cork's feet, and he could not miss.Perez might have reduced the deficit six minutes later

Substitute De Jong did pull one back from Colback's cross with two minutes remaining, but it proved too little, too late