Ashley Young fired Manchester United to a last-minute victory at Newcastle to maintain their charge for a top-four finish.

The game looked to be heading for a draw when Magpies keeper Tim Krul could only stab a hurried clearance straight to the wing-back, who steered the ball past him to secure a precious 1-0 Barclays Premier League win.

The Holland international had earlier cast himself in the role of hero after pulling off a stunning double-save to deny first Marouane Fellaini and then Young on a night when Papiss Cisse and Jonny Evans became involved in an ugly spat which could yet have repercussions.

But having survived strong 10th-minute appeals for a penalty for Chris Smalling's challenge on Emmanuel Riviere, the visitors extended their recent run to just two defeats in 22 games in all competitions with the victory they craved.

Wayne Rooney was once again asked to lead the line after his brace against Sunderland on Saturday, and he looked to be the man most likely to break the deadlock during a first half in which the visitors dominated possession.

With Ander Herrera and Fellaini, who was preferred to Radamel Falcao, using the space in the middle of the field to feed Antonio Valencia and Angel Di Maria down one wing and Marcos Rojo and Young down the other, the Magpies found themselves having to defend deep and in numbers for the greater part of the opening 45 minutes.

Di Maria failed to make the most of a first-minute half-chance after Mehdi Abeid had gifted the ball to Herrera in midfielder, and Louis van Gaal's men might have paid had referee Anthony Taylor viewed Smalling's 10th-minute challenge on striker Riviere inside the penalty area in the same way as the locals.

Television replays suggested Taylor had got it wrong, but Newcastle had little time to reflect upon their misfortune as United surged forward with Herrera slicing wide with 15 minutes gone.

But it was Rooney who passed up two glorious openings inside four minutes as he first shot wide from close range after Young had helped on Di Maria's cross, and then allowed to ball to get away from him as he attempted to flick it around defender Mike Williamson.

Cisse smashed a left-foot shot from distance wide 10 minutes before the break, but then became involved in an angry exchange with Evans with television pictures suggesting both men had spit, although not necessarily at each other.

But the most significant goalmouth action came in the final minutes of the half with Krul turning away Fellaini's firm header at one end before De Gea managed to block Riviere's shot as he slipped after running on to Moussa Sissoko's beautifully weighted through-ball.

Rojo had Krul looking anxiously towards his top corner within two minutes of the restart when he unleashed a swerving left-foot shot which flew just over the angle of bar and post.

However, it was De Gea who had to be at his best two minute later to repel Riviere's stabbed effort after Fabricio Coloccini had headed on Ryan Taylor's free-kick.

But Krul had to be at his best to prevent the visitors from taking a 54th-minute lead when he parried Fellaini's shot on the turn after he had controlled Di Maria's cross, and then recovered in time to block Young's follow-up.

Di Maria departed four minutes later as Adnan Januzaj took his place, but it was the arrival of Jonas Gutierrez for the first time since October 2013 following his successful battle against testicular cancer which caused the bigger stir. 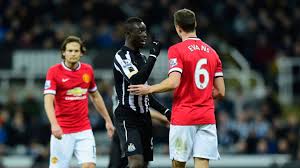 Newcastle should really have been ahead three minutes later when substitute Ayoze Perez broke from his own half and having drawn lone defender Evans, slipped Cisse in, but the 11-goal Senegal international scuffed his shot horribly wide to let De Gea off the hook.

Krul came to the rescue once against 15 minutes from time when he palmed away Rooney's downward header from Young's cross at the foot of his left post, but he was finally beaten at the death when he could only scuff Abeid's ill-judged back-pass to Young, who fired into the empty net to win it.