You Will Never Guess Who Has Retired! 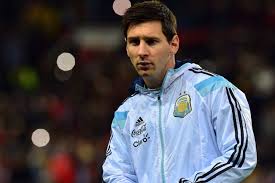 The Barcelona forward has decided to quit without winning a major trophy with his country.

Following the defeat at MetLife Stadium in East Rutherford, New Jersey, Messi admitted after failing to win in four finals for Argentina he had decided not to carry on.

The 29-year-old told Argentinian TV network TyC Sports: "I think it's best for everyone, for me and for many people who want it. The choice for me is over, it is a decision. I tried many times (to be champion) but did not."

Messi had become Argentina's all-time top scorer with 55 goals earlier in the tournament but final heartache was followed by his post-match announcement.

He added: "There are four finals, not for me, unfortunately, it was what I wanted. More than ever I wanted to win at least this cup but (it) could not be.

"It's very hard, but the decision is taken. Now I will not try more and there will be no going back.

"I tried many times to get a title and failed."

Argentina lost 4-2 on penalties as Chile retained the title following a game which had ended 0-0 after extra time.

In a repeat of last year's final when Chile also won on spot-kicks, both teams finished with 10 men in a bad-tempered clash as Argentina's Marcos Rojo and Chile's Marcelo Diaz saw red in the first half.

Messi and Lucas Biglia missed penalties for Argentina in the shoot-out to hand Chile their second Copa America title in a special tournament which was played to celebrate the competition's centenary.

Away from international football Messi has had a glittering career with Barcelona, who he joined at the age of 13 from Newell's Old Boys.

Messi has also been awarded the FIFA Ballon d'Or as the world's best player five times.