Wrapped Up In The Mags v Mackems Moment

Former Arsenal striker Ian Wright said on BBC MOTD that the Everton goalkeeper was wrapped up in the Geodie/Mackem culture: 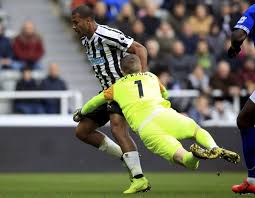 "Jordan Pickford had an erratic game. He got too wrapped up in the emotion of Sunderland versus Newcastle with the home crowd.

"How he didn't get sent off for the foul on Salomon Rondon is terrible. It was a deliberate attempt to take the man out and there is absolutely no double jeopardy there.

"He was gesturing to the Newcastle fans behind the goal but he should've been focusing on the game. He parries the ball back into the danger area far too often and it led to Newcastle's equaliser."