Will We Compete In Cup Ties?

Newcastle manager Rafael Benitez said he "wants to compete" after watching his team beat Southampton in the Premier League at St James's Park.

But we haven't even TRIED to compete in FA Cup or League Cup ties since Ashley took over the club. 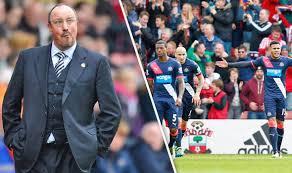 No Premier League club has a worse record than us in cup ties over the last ten years, yet Rafa is included in that shocking run.

Benitez, who is out of contract in the summer, said nothing had changed in regard to his job situation and suggested he still needs assurances before deciding his future.

"We are in the same position as we were before," he said. "When I came here, I could see the potential of the club to be challenging, certainly for seventh to 10th in the table but looking higher.

"But when you analyse the transfer fees and wage bills of other teams, we're not competing.

"I am the manager until 30 June. We can see the potential. When you see the teams between seventh and 15th, we have to compete with them."