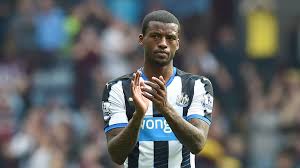 Wijnaldum moved to Newcastle, then in the Premier League, from Dutch giants PSV in the summer of 2015.

According to BBC Sport at the time, the Magpies had to pay PSV a transfer fee of £14.5 million in order to secure the services of the Netherlands international midfielder.

The 25-year-old has suggested that he was thinking of joining Everton last summer, but a discussion with then Newcastle manager Steve McClaren changed his mind.

“Last year lots of clubs wanted to sign me,” The Sun quotes Wijnaldum as saying. “But I didn’t want to go to Italy, France or Germany — the Premier League was my aim.

“Everton were interested in me and I had a good feeling about them until I went to look at Newcastle.

“People in Holland don’t realise what a gigantic club they are. And after a talk with Steve McClaren I was on board.”

The Magpies got relegated from the English top flight at the end of the 2015-16 campaign and are playing in the Championship at the moment.

The Dutchman joined Merseyside outfit Liverpool from Newcastle last month. According to BBC Sport, the Reds paid the Magpies a transfer fee of £25m in order to secure the services of the former Feyenoord midfielder.