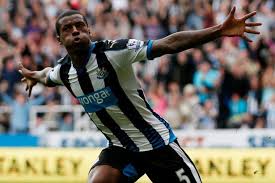 The Toffees were one of the clubs interested in Wijnaldum last summer before he opted to sign for Newcastle and they are interested in signing him again this close season – as are Roma and Southampton.

Wijnaldum has been cagey about his future since the end of the season and after scoring against Poland in midweek, he spoke to Dutch media about where he would be playing next season. Once again, he failed to offer many reassurances about his commitment to the cause.

Wijnaldum told Dutch Fox Sports: “Every day I am being asked about my future, not just by journalists, but also by my friends and family.

“My first focus is the national team and then after the holidays I’ll see what happens. I’m working on it, but it’s not easy.”

Everton’s interest is not much of a surprise. With new investment secured they are looking to make waves in the transfer market this summer and are attempting to bring Ronald Koeman to Goodison Park as manager – a move that would likely increase their interest in Wijnaldum. Koeman is an admirer of his compatriot, who signed for United last summer from PSV Eindhoven.

Southampton’s interest is not reliant on Koeman staying.

Newcastle will not be unduly worried about interest and speculation surrounding Wijnaldum.

He is on a long-term contract so they can name their price and after he scored 11 goals last season they would be looking to make a substantial profit even if they did sell. Rafa Benitez has been given assurances that he will be backed if he wants to keep anyone at United – and he wants to keep Moussa Sissoko , another who has been linked with a move away from St James’ Park.