Why Is Take-Over Played Out In The Media?

According to the Chronicle, Newcastle United insiders say that there are currently three groups interested in buying the club off Mike Ashley.

The Bin Zayed Group’s approach for Newcastle has been heavily publicised, but uncertainty still surrounds the bid. 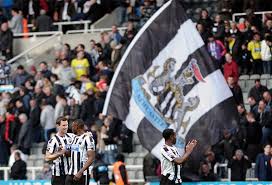 Sheikh Khaled has suggested that he has an agreement with the current Newcastle owner, but no bid has been formally submitted yet, according to reports.

And the potential takeover at Newcastle is further complicated as there are now claims that a second and third group are also said to be keen on buying the Tyneside club.

Although the Bin Zayed Group’s bid is thought to be way further down the line, they are believed not to be the only interested party in taking Newcastle off Ashley.

Ashley, for his part, has kept tight lipped over the speculation so far - but the Chronicle claims that he does have concerns.

The Newcastle owner reportedly fears that the deal is being played out in media too much for his own liking.

That stunned many supporters because many of us thought it was Ashley who was simply trying to boost season ticket sales by suggesting a deal was in the pipeline.

Every fan would LOVE a takeover, but this Bin Zayed Group are making a lot of noise, and we wonder ... for what reason?