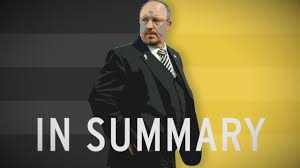 Ewood Park is a difficult venue to visit, and Newcastle now have another fixture to add to their calendar, in what looks increasingly likely to be an intense relegation battle over the coming weeks.

Rafa made eight changes for a competition he has no interest in. So, let's be honest ... why do we bother entering it?

The oldest competition in  world football has been degraded and put on the scrap heep by (so called) top clubs who could not care less ... because the money is better elsewhere.

£3.2m goes to the winners of the FA Cup, and that isn't worth Newcastle United and a whole host of other clubs playing their first team players.

Money dictates, and the fans - who would give ANYTHING to see the club lift a cup - are nothing more than shit on Ashley's shoes!

Thousands of supporters will head to Ewood Park (and I will be one of them) and all for what? For nothing. Because the club we support could not care less!

The TV companies build up a competition that is only of value to the minnows ... because it provides them with the chance of a windfall ... and some glory.

As for Newcastle United? Well Rafa BLEW it by playing the dead-beats and the uninterested, because he now has another fixture he didn't want.

God help us if ever we get into Europe. More fixtures!

Our season was dead by August!

No interest in the cups ... just a battle against relegation ... as if St James' Park wasn't depressing enough.

OK we always blame Ashley ... but I blame Rafa too!