Who In Their Right Mind Would Take On ... 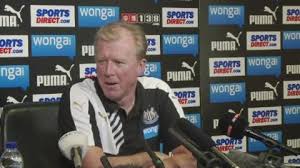 McClaren is one of half a dozen leading candidates for the head coach role at the KCOM Stadium, vacated by Steve Bruce last week after quit due to issues with the club's budget for the new season.

The 55-year-old is out of work having been sacked by Newcastle United at the end of last season, but he is being seriously considered by The Tigers.

The former England boss is still based around North Yorkshire following his time with Middlesbrough, and he would love the chance to have another crack at the top flight with Hull.

Roberto Martinez, who was axed by Everton last season, is also in the reckoning - although the club are believed to be looking for a head coach rather than a manager.

And with McClaren happy to be a head coach - as he was at Newcastle and during his time abroad with FC Twente and Wolfsburg - that puts him in a very strong position.

Hull are hoping to make an appointment this week.