Where The Mackem Money Went To ...

... Sunderland supporters raised tens of thousands of pounds in memory of two Newcastle supporters killed in the MH17 disaster.

Magpies fans (who were well known to NU-Mad readers) Liam Sweeney and John Alder were on their way to watch the Magpies in a pre-season tour of New Zealand when the Malaysian Airlines plane was shot down by pro-Russian separatists in Ukraine. 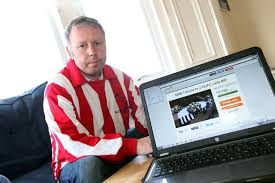 Sunderland supporter Gary Ferguson (editor of the fanzine Ready to Go), hoping to raise £100 to buy a floral tribute.

This week Gary explained where the money went to.

It has been shared between the Sir Bobby Robson Foundation and Newcastle’s Marie Curie Hospice, in accordance with the wishes of the Sweeney and Alder families.

Each charity received just over £15,2000 from the collection.

Gary, of South Shields (told the Chronicle): “The money actually went in a couple of months ago but they asked if I wanted to go and see Lesley in the Marie Curie and have a look around the place.

“The hospice gets some financial support from Marie Curie, but its money comes mainly from the community.

“This is the single biggest donation they have had and it was nice to see the work it is funding.”