When Will Pardew And Moyes Go? 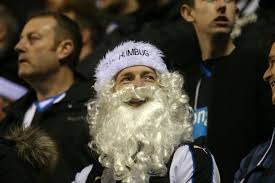 The next Premier League manager to go?

Well Moyes is in the frame, and it's only a matter of time before the Mackems turn on him because ... "How do you know it's Christmas? The Mackems are calling for a new manager!"

But it seems Alan Pardew will go before him if you read the bookies odds this morning.

However, Bob Bradley could get the sack this week!

Former Newcastle United manager Alan Pardew is once again facing fierce criticism from Crystal Palace fans after they were beaten 2-1 at home by Manchester United.

The defeat leaves them just three points above the relegation zone, despite spending over £50 million in the Summer transfer window.

With the score poised at 1-1, and with Palace on course to securing a precious point, Pardew sacrificed midfielder James McArthur, replacing him with striker Fraizer Campbell in the 87th minute later.

The gamble backfired, and with Palace exposed in midfield, United scored the winning goal just a minute later - much to the dismay of Eagles fans.

We have reported in recent weeks about how Palace fans are fed up with Pardew’s refusal to change his approach as they continue to suffer a dismal 2016.

And that has shown no signs of stopping, with scores of supporters voicing their frustrations at Pardew’s methods in the wake of the defeat.

Alex Barton summed up the thoughts of Palace fans, by tweeting: “A mate of mine just put it perfectly. Pardew keeps rolling dices hoping for a six, yet only ever gets a one. Game management is non-existent.”

Dan Winter believes the discontent towards Pardew is only going to grow, as he commented: ““We want Pardew out” at the back of block B. It’s going to get nasty at games soon if Parish doesn’t act.”

Meanwhile, Wayne Green believes the blame lies at the feet of chairman Steve Parish, as he said: “(Pardew) should’ve been gone months ago. Parish is taking our club down, not Pardew.”