What Must Townsend Be Thinking? 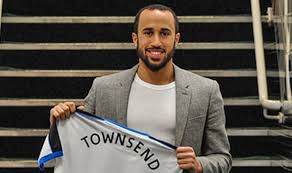 Townsend signed for the Magpies from Tottenham in January for £12 million with getting more first team football the main aim.

Since he arrived at St James' Park, his former club Tottenham have put themselves firmly in the race for their first league title in over 50 years.

But that isn't something that Townsend has paid too much attention to regardless of Newcastle being six points away from safety and with only seven games left to play.

'I definitely don't have any regrets,' he told the Shields Gazette following the 3-2 defeat by Norwich City at Carrow Road on Saturday.

'I'm playing 90 minutes of games, and I'm 100% delighted with the move I made to Newcastle. I'll give absolutely everything to help this club stay in the league.'

Townsend can't quite understand how Rafa Benitez's side are in the position they are in.

'For me, we've got an incredible squad, full of internationals in almost every position. It's crazy that we're in the position we're in.'

The 24-year-old has also admitted that he hasn't given England and the European Championship in France this summer any thought.