What Is The Gayle Story?

Dwight Gayle looks set to leave Tyneside to complete a move to recently relegated West Brom – with Sky Sports suggesting it could be a swap deal. 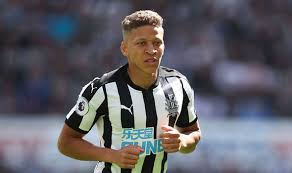 It is not clear yet whether a deal would be a player-plus-cash on a straight loan swap but the 27-year-old looks set to return to the second-tier, where he excelled in Newcastle’s promotion winning campaign two years ago by scoring 23 goals in 32 appearances.

The other part of the deal with West Brom looks set to see Salomon Rondon move to Tyneside, Sky Sports report, in what could either be a loan deal or a permanent switch – depending on what is agreed regarding Gayle.

Speculation linking Newcastle with Rondon has been present for some time and it is interesting to see that it looks like both the Venezuela international and Yoshinori Muto will be brought into the club, which may suggest a tactical shake-up.