What DID Convince Ashley To Stick With Pardew?

Mike Ashley must have thought long and hard about it too, because he drafted in Joe Kinnear "just in case".

There was a summer of discontent, with rumours and speculation, but many believe it was that eight and a half year contract that saved the manager.

Ashley would have to pay Pardew SEVEN years of that contract, had he sacked him.

And perhaps the arrival of Kinnear was a stick in the back, rather than a boot up the arse for the manager.

Pardew lay low for weeks - not saying a single word - and that is not like the man.

He is not a man to keep quiet, as we have seen this week, calling himself a "good manager", "copying Sir Bobby", and a whole host of one-liners to milk his four consecutive wins.

He loves himself, indeed, talking about his semi-successes at Reading and West Ham ... when both sets of supporters haven't a good word to say about him!

Alan Pardew: “I remember there have been a few games in my career where I felt my job was on the line and I have managed to get a win and keep it.

“I didn’t think Everton was one of those days (in September) but I can remember at Reading going to Notts County and thinking my job was definitely on the line.

“We won 4-3 that day and there were times at West Ham in the Championship.

"Here, I think the Liverpool and Sunderland games in April were a tricky time for me and the QPR game at the end of last season was important as well, but I don’t hide from that.

“When you look at it, longevity and continuity does work. 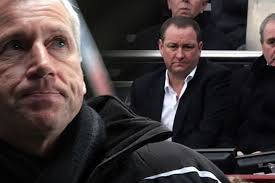 “It is just about being able to get past those difficult games and dealing with the social media we have at the moment which brings instant reactions to a series of defeats.

“Or even a single defeat in Andre Villas Boas’ case. I’ve had that many times and Monday was a terribly disappointing day.

"Especially when sometimes you don’t know that it is coming.

"Sometimes you suspect it is coming, but you just feel that next game is the one the turn things around.

“How do you get through? You have to be strong. Stay strong in your beliefs and what you are doing.

“Hopefully the players can find that performance for you, like AVB’s players did on Sunday.

“Let’s be honest, whatever has been said the players played for him and he got a strong result.

“I have a few ex-players who are managers now and I always say to them make sure you are looking after the club and the academy, laying down the foundations, because the chairman might look at that and you might just get one extra game which gets you the win and keeps you in the job.”