Benitez, whose Newcastle side currently sit top of the Championship, is on the radar of the Hammers with the future of current coach Slaven Bilic uncertain. 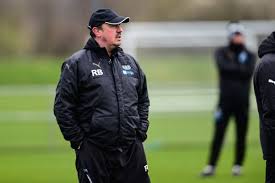 Bilic's side are nine points clear of the drop zone, but after just three wins since the turn of the year, the former Croatia centre-back's position has come under scrutiny with the Irons.

Benitez ended his first season in charge at Anfield by landing the Champions League.

And according to The Mirror, former Reds boss Benitez has emerged as a frontrunner to take over from Bilic at the end of the campaign.

Despite leaving Anfield seven years ago, Benitez is still fondly remembered by Reds fans after winning the FA Cup in 2006 12 months after leading them to arguably the most famous night in the club's history with the 2005 Champions League win in Istanbul.

The Spaniard was unable to keep Newcastle in the Premier League after joining them in March 2016, but the ex-Real Madrid manager is likely to oversee an instant return to the top flight next term.