Welcome To The Bridge ... 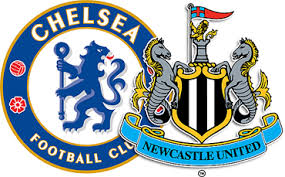 Away fans are located on one side of the Shed End lower tier (towards the East Stand side), where the normal allocation for league games is 3,000 tickets. For cup games the whole of the Shed End can be allocated. The view from this area of the ground is pretty good and the refreshment areas are modern looking. There are televisions on the concourses, showing amongst other things at half time, highlights from the first half. There is a range of food and drink on offer, but like a number of London Premier League Clubs it is quite pricey; 'Shed Load' Burgers (£5.60), Chicken Strips and Lattice Fries (£6), Hot Dogs (£4.20), Corn on the Cob (£4.20), Chicken Curry Pie (£3.80), Minced Beef and Onion Pie (£3.80) and Lattice Fries (£3.90). Alcohol is also available in the form of Singha Beer (bottle £4.20).

On the whole I found Stamford Bridge a pleasurable day out. There was a good atmosphere within the ground and even though there wasn't a lot of space between the home and away fan sections, in didn't feel intimidating. The stewards were also pretty laid back. I was seated in the Shed End and I did find a little difficult to go up and down the steps of the stand, due to the stand itself being quite steep and the steps between rows quite small. The only ‘real hassle' I had was trying to get through the lines of stewards situated outside the stadium at the entrance to the away section. They seemed to assume that I was a Chelsea fan and kept ushering me towards the home end. Only after showing my ticket for the visiting section for a third time did I finally make it inside!

The pubs near the ground can be quite partisan, so I would recommend getting a drink somewhere on the journey there. A number of away fans drink in the pubs around the Earl's Court area, which is only a couple of tube stops away from Fulham Broadway station. The Courtfield Tavern, which is almost opposite the main entrance to Earl's Court Tube Station, is a particular favourite with away supporters. This pubs serves real ale, offers hot food, but both at what can be described as 'London prices'. Gordon a visiting Newcastle fan adds 'there are quite a few pubs on the Kings Road that are okay as long as you don't break into a chorus about your team!'. Alcohol is available inside the stadium, however for certain fixtures the Club opt not to sell any to away supporters, so don't bank on it!

How To Get There And Where To Park

Leave the M25 at Junction 15 and take the M4 towards London, which then becomes the A4 up to Hammersmith. Carry on over the Hammersmith flyover and after a further one and half miles, take the turning Earls Court. Continue past Earls Court station and down the one way system until you reach the junction with Fulham Road. At this junction, turn right at the traffic lights and after about half a mile, you will see the ground on your right.

A number of local resident schemes are in operation around the stadium, so you may well end up having to park some way from the ground itself. Thanks to Andy Harris for providing the directions.

The nearest tube station is Fulham Broadway which is on the District Line. Take a tube to Earls Court and if necessary, change for a Wimbledon bound tube. The nearest over ground train station is West Brompton, which is served by trains from Clapham Junction (which is in turn served by trains from London Waterloo and Victoria stations). It is around a 15 minute walk to the ground from West Brompton station. As you come out of the station turn right and proceed along Old Brompton Road. You will soon see the Brompton Cemetery immediately on your right and further along set back from the road is its impressive looking entrance. Turn right through the entrance into the cemetery (there are normally a number of other supporters doing the same) and as you walk on through the cemetery you will soon see the tops of the stands of Stamford Bridge. If it is a night game then do not go into the cemetery, but take the next right after the cemetery into Finborough Road. After a half-mile, turn right onto the Fulham Road and the stadium is located down on the right.