We Made The Most Of The Chances

Two efforts on goal and two on target: Newcastle's forays forward might have been few but, unlike City, they made the most of them. 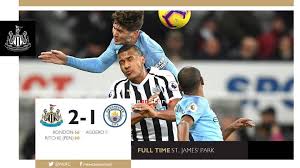 When Newcastle wanted relief from City's persistent attacks they sought Rondon whose hold-up play was impeccable once again.

The Venezuelan also remains the Magpies' biggest weapon in the opposition area and, with his first attempt on goal, he hooked a shot past the reach of Ederson.

Benitez no doubt would have been happy with a point, but his side were then given a golden opportunity to take all three.

The usually focused Fernandinho lost his bearings 12 minutes from time when his attempt to play a backpass to his keeper was pounced upon by Longstaff.

The midfielder had his legs clipped by the Brazilian midfielder and Tierney signalled a spot-kick.

Ederson needed treatment on the pitch which kept the home crowd and penalty-taker Ritchie waiting, but the Scot kept his nerves in control and fired low to the left of the City keeper once play resumed.

Newcastle are at Tottenham on Saturday (12:30 GMT).