We Drop Into The Relegation Zone

Arsenal and Chelsea were 1-0 winners over Newcastle and Southampton, respectively. 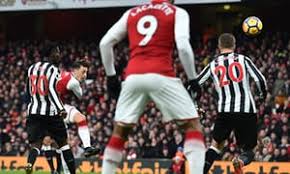 Rafa Benitez's Newcastle are 7/4 for a return to the Sky Bet Championship, while a missed penalty by Glenn Murray was the key moment of a goalless draw between Brighton and Burnley. Murray was deemed to have been felled by James Tarkowski in the 36th minute but Murray sent the resulting spot-kick well over the bar.

Manchester City kept up their relentless form to pull 14 points clear at the top of the pile in the Premier League with a 4-1 demolition of Tottenham at the Etihad.

Hot on the heels of a 4-0 stroll at Swansea in midweek, Pep Guardiola's side took a while to hit top gear but went into the break a goal to the good after Ilkay Gundogan's header had put them in front after 14 minutes following some hapless Tottenham defending.

The outstanding Kevin De Bruyne effectively killed the game with 20 minutes to play after blasting into the roof of the net, before Raheem Sterling rounded things off for the hosts with two goals inside the final 10 minutes.

Christian Eriksen claimed a consolation for Spurs with a neat finish in stoppage time but City were a different class throughout and a 16th straight domestic success never looked in much doubt.

Christian Benteke secured some redemption as Crystal Palace climbed out of the relegation zone with a 3-0 win at Leicester.

A week after defying manager Roy Hodgson's orders to take - and miss - a penalty, Benteke netted the opener in the 19th minute before Wilfried Zaha doubled the advantage for the Eagles.

Things got worse for Leicester when birthday boy Wilfried Ndidi was shown a second yellow card for a dive and Bakary Sako scored an injury-time third on the break. Having lost their opening seven league games, Palace are now unbeaten in seven.

Huddersfield end their away drought in style, beating Watford 4-1 in a game where referee Michael Oliver took centre stage.

The Terriers had not scored an away goal since the opening day of the season but Elias Kachunga, who was later carried off after suffering an apparently serious injury, gave them the lead only six minutes in.

Aaron Mooy doubled their advantage in the 23rd minute and their grip on the game tightened when Watford striker Troy Deeney was sent off for a dangerous tackle.

The game appeared over when Laurent Depoitre made it 3-0 five minutes after half-time but Huddersfield were controversially reduced to 10 men when Jonathan Hogg was shown a second yellow just past the hour mark.

Abdoulaye Doucoure pulled one back shortly afterwards but that was where Watford's comeback ended and Mooy's 89th-minute penalty gave Huddersfield the final word.

The pressure on Potters boss Mark Hughes will only intensify after a 3-0 home loss made it four defeats from five games and left them one point above the relegation zone.

Mark Noble netted a 19th-minute penalty and Arnautovic, who had been booed throughout by the Stoke fans following his summer departure, celebrated gleefully after making it two in the 75th minute.

The Potters probably thought it could not get any worse but their porous defence was pierced again by Diafra Sakho.

On Sunday Mohamed Salah struck his 14th goal of the Premier League campaign as Liverpool thrashed Bournemouth 4-0 at the Vitality Stadium to climb to fourth place.

Jurgen Klopp's men extended their unbeaten league run to nine games under precious little pressure, getting back to winning ways after successive draws against Everton and West Brom.

Manchester United survived a late scare to clinch a 2-1 victory at West Brom.

Romelu Lukaku's 15th goal of the season and Jesse Lingard's deflected effort secured the victory at The Hawthorns.

The Red Devils were made to sweat after Gareth Barry's second-half strike but held on, and once again they sit 11 points behind Premier League leaders Manchester City.