We Don't BUY Superstars - We Make Them!

A system Arsene Wenger has used for years.

Wenger's mantra is that "we don't buy superstars, we make them!" 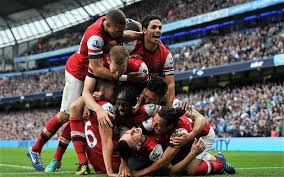 And Ashley wants to keep his money in his arse pocket, so Alan Pardew knows the biscuit tin doesn't hold much money.

The Premier League is regarded as having three sections:

1) Those pushing for the title or European qualification.

2) Middle Earth - those happy to plod on (a section Newcastle seem to be in with Ashley saying his aim for this season is 10th position).

But Arsenal's chief commercial officer reckons there are FOUR sections- because NOBODY can compete against Man City's multi-millions.

The Gunners are chasing a first league title in ten years and Tom Fox said:

"You can't compete against that.

"We're a football club in London and we are a global brand, but we would never try to compete against the financial resources of a country.

"I just don't think that's a very realistic thing for us to do … trying to chase those types of owners. Obviously it's just not possible.

"Instead of forking out large sums for the world's finest players, Wenger takes greater pride and pleasure in nurturing good players into world beaters.

"Almost by necessity, we have a financial model that doesn't allow us to go into the market every summer and buy all of the best players that are for sale.

"Wenger's mantra is that we don't buy superstars, we make them.

Sadly, at Newcastle - we MAKE superstars ... then we SELL THEM!