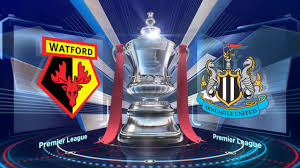 Watford sealed their spot in the fourth round of the FA Cup after a 1-0 win against Newcastle at Vicarage Road.

Hornets skipper Troy Deeney capitalised on an error by Georginio Wijnaldum to score the only goal of the game shortly before the interval.

Newcastle, who have now lost their last five FA Cup third-round ties, enjoyed the better of the chances but failed to score for the fourth consecutive match.

Following a hectic festive period, Obbi Oulare was handed his Watford debut as Odion Ighalo, scorer of 14 goals this season, dropped to the bench in one of four changes made by Quique Sanchez Flores.

But despite battling for their Barclays Premier League survival, Newcastle boss Steve McClaren signalled his intent by fielding his strongest possible side. Kevin Mbabu was the only change as he came in for the injured Jack Colback.

The visitors also reverted to a 3-5-2 formation in a bid to deal with Watford's strike duo of Deeney and and Oulare. And for the opening 43 minutes it worked.

Indeed it was Newcastle, now winless in their last five outings, who enjoyed the best of the opening period.

Watford stopper Heurelho Gomes pulled off a fine stop from Daryl Janmaat with only eight minutes gone and the Brazilian was in action moments later as he blocked Wijnaldum's neat flick at his near post.

Ayoze Perez then missed a great opportunity to fire McClaren's side into the lead when he screwed his shot wide following fine work on the right-hand side by Moussa Sissoko.

And with five minutes to go to the interval Mbabu was allowed to coast into the Watford area before his left-footed effort was turned behind by Gomes.

Newcastle were on top but could not find the breakthrough - and somewhat inevitably they were punished for failing to find the target.

With the interval fast approaching, a woefully misplaced backpass from Wijnaldum fell to Deeney and the Hornets skipper made no mistake as he rounded Rob Elliot before side-footing into an empty net to score his seventh of the season.

Newcastle headed into the interval staring at their fourth consecutive 1-0 defeat, and their luck failed to improve in the second half.

On the hour mark, the ever-impressive Sissoko cut in from the left-hand side but his delightful through-ball was just too long for Aleksandar Mitrovic, sliding in at the near post. It seemed it would be one of those days for the visitors.

And 10 minutes later, Sissoko cantered into the Watford area before teeing up substitute Florian Thauvin but Gomes was equal to his shot. Thauvin was adjudged to have been offside, but it summed up the Magpies' afternoon.

That was as good as it got for Newcastle, with Watford returning to winning ways and booking their spot in the fourth round.

For the Magpies, who were roundly booed by their visiting support at the final whistle, they will now have retaining their top-flight status as their only goal as the pressure continues to grow on McClaren.